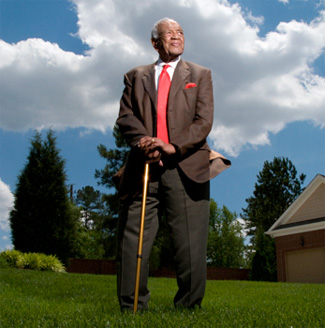 Churches call ministers, but it takes time to grow a pastor, says the Rev. Gardner C. Taylor, the legendary “dean of the nation’s black preachers.”

The Rev. Gardner C. Taylor was senior pastor at Concord Baptist Church of Christ in Brooklyn, N.Y., from 1948 to 1990. Now retired and living in Raleigh, N.C., he spoke with Faith & Leadership in December 2008. In the interview, Taylor discussed some of the challenges of pastoral leadership.

Q. What are some of the primary tasks of pastoral leadership?

The first job of a pastor is to love people. That may sound syrupy, but it’s true. If a preacher, he or she, does not love people, forget it. On the negative side, they will test your love 25 ways to Sunday, but that’s the negative side. There are positive sides also. My God, you got to love them.

I found in pastoring . . . the moment you think you got it all, they come at you with something new. And I thought, “My God. I thought I’d seen it all.”

I think also a pastor has to be able to be a transmitter of the gospel. I won’t say communicator, everybody uses that term. I think the preacher, every preacher, has to see the gospel from his or her own slant, though his or her own lens.

I spent a couple of years teaching at Shaw University Divinity School, and one evening in a class I just happened to come upon an idea. You take this thumbprint and it’s unique, and there has never been one like it in the history of the world. And I think each preacher has an individuality. Though we’re all dealing with the same thing, there is a shade of difference. Like the thumbprint…is unique, and police bureaus can take it and trace it and separate me from everybody else. And if that’s unique, then something closer in must be. So, every preacher has to find who he or she is.

Q. You’ve talked about preaching built around “sympathy for God.” What do you mean by that?

I believe that Jesus represents in the years and in time what God is in eternity. And he said somewhere, “my soul is exceedingly sorrowful.” I believe love inevitably, invariably involves vulnerability. You just cannot love and be invulnerable. You just cannot. And I believe, working up from us to God, that he cannot love us without being vulnerable.

I had a cross at Concord Church and a thing on it I got from Lamentations, “Is it nothing to you, all you that pass by?”

Q. What were some of your hardest moments in ministry?

I had been (at Concord Baptist) three or four years. The church was a huge building. It stretched from Putnam Avenue to Madison, a full city block. And it burned to the ground. Everything except just a skeleton of brick on the outside. I was a kid. I didn’t know what I was doing. Well, that was one, and, of course, my first wife’s death. She was struck by a truck not far from my home, after 54 years. You never get over that. And I’ve lost friends along the way.

Q. And what were some of the toughest moments in your role as pastor?

My first years were very difficult. I pastored my father’s church in Baton Rouge. I won’t say “pastored.” I was there, whatever I was doing. I was a favorite son and everything was wonderful. Then I went to the cross currents of Brooklyn and people did not know me and I did not know them. I had never seen so many people in a church, and that frightened me in a way. I had to get used to that. There was an 18-month interim between my predecessor’s death and my coming there. And the church clerk, who became a great friend, said to me, quoting from the Bible, “There was no king in Israel and every man was a king unto himself.” And I found that out, and every woman, too, for that matter. So I had to deal with that. It was a trial.

Q. Starting in a new position obviously can be a great challenge for a pastor. What advice do you have for pastors who are in that transition?

Coming into a place, many young pastors come in as if people ought to act as if they’ve known them for years. And no church elects a pastor. Churches elect ministers, and that’s a noble cause. But “pastor” has the suggestion of “shepherd,” and that has a suggestion of reliance and confidence on both sides, and that takes time. You cannot rush that. I don’t care who the person is. You have to grow into being a pastor. The mistake we preachers make is to want people to accept us as pastors from the first day in the sense of being pastor and wanting to bypass that apprenticeship, and it can’t be done.

Nobody -- I’ve told ministers this -- you walk along the sidewalk, nobody will turn himself or herself over to a stranger. You may be friendly and congenial, but there is a bit of a question if you’re not sure about the person. I know two or three churches in this country today going through a great trial because the pastor has not been there any length of time, and they want to act as if they are pastors, and they are not.

Of course, there are two sides to this, too. A minister has to work to become a pastor and people have to work toward seeing that minister as pastor. It’s a two-way street.

Q. That’s a great example of a challenge of pastoral leadership. Elaborate on that, on the people’s side of that, on their responsibility as followers.

Naturally, we are not born to be followers. We’re born to assert ourselves and make our way, as we say. So it’s a delicate kind of relationship. Very delicate. And yet I don’t think the pastor can get maudlin about it and syrupy. There has to be some objectivity and firmness in the way they look at that relationship. I was at my congregation 42 years. On the other side, there never was a 100 percent pastor-congregation relationship. Never. There will be people in every congregation who look askance at the preacher. He may become the pastor. But there are varying degrees of commitment to the pastor. There are some people who just never quite get there.

Q. Aren’t you supposed to be?