Alaina Kleinbeck is the director of the Thriving in Ministry Coordination Program at Leadership Education at Duke Divinity. In addition, she serves Duke Divinity School as director of youth ministry initiatives. She has served ministries and organizations in suburban St. Louis, urban Houston, Central America and Norway. She holds degrees from Concordia University Nebraska and Duke Divinity School. From 2013 to 2018, she was director of the Duke Youth Academy for Christian Formation. Before that, she was a director of Christian education working with middle school students. She is committed to developing faithful Christian practices within communities, eliminating barriers to resources for Christian communities and pastors at the margins, and including young people in all aspects of life in the church. 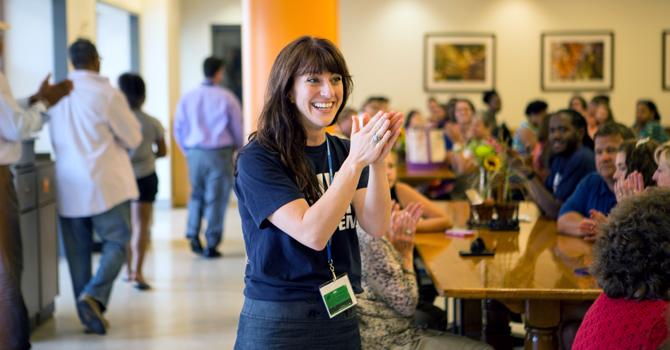 Jesus interrupts violence with peace, and hate with love. The director of Duke Youth Academy says she has been called into the work of interruption, leading conversations with young white people about race, police brutality and injustice.

Earlier this year, I spoke to 150 mostly middle school youth at a winter retreat focusing on the Lord’s Prayer. The assembled youth were mostly white, mostly middle class and mostly looking forward to rambunctious free-time activities.

Before I arrived, I had prepared the first two sermons and thought through ideas for the remaining two. On Friday night, I preached about God’s holiness. On Saturday morning, the topic was God’s provision.

Later that morning, as I pondered daily bread and deliverance from evil for the remaining sermons, it hit me in a new way that these were young people, the same age as Jordan Davis and Trayvon Martin and Tamir Rice. Most of the young people at this retreat didn’t look like Jordan, Trayvon and Tamir, but they might attend school with them. Or perhaps they attend schools intentionally built to keep out(link is external) the Jordans, Trayvons and Tamirs.

I often pray for young people who have died or been brutalized in racially motivated violence. But I have observed that discussions about police brutality against black and brown people are rare in a white youth ministry context.

The more I learn about my own identity as a white Christian youth minister, the more I am convinced that these conversations with young white people lie at the core of my calling as a Christian. I’ve come to know a Jesus who interrupts violence with peace, and hate with love, who doesn’t sit idly by, overwhelmed by a challenge too big to overcome. In drawing closer to God, I have been called into that work of interruption alongside a community of faithful people.

So in that third sermon, I said that God cares about the black and brown young people in their schools and communities who are mistreated and maligned. I said that black and brown lives matter to God, and that God’s protection is made real when we act against mistreatment and the racism in our communities. We live the Lord’s Prayer when we speak and act against racial brutality.

While I had been passionate about the evils of racism in my country, that moment marked the beginning of my journey toward anti-racist youth ministry in the white church. I’m learning that this is not an identity to be achieved -- or a place at which I will arrive all on my own.

Rather, anti-racist youth ministry in the white church is a daily practice of calling myself and my fellow white youth ministers to imagine a world in which the lives of black and brown youth are as valued as the lives of white youth, and to work with others in making that imagined world real.

It is a daily practice of vocal repentance of the cultural violence done against people of color in this country and in my community, and of the ways in which I’ve benefited from that violence. It is investing in and partnering with people of color to protect their lives and dismantle the systems that oppress them, allowing them to change me and the content and form of the programs I lead. It is asking my white friends who are also striving to be anti-racist to hold me accountable and challenge me to think bigger about our collective work to dismantle racism.

Since the sermon that awakened me to the work of becoming an anti-racist youth worker, I have been asking God how I might use my role as youth worker and leader of youth workers to empower real change in our culture, our communities and our churches.

How might God use me and the work of youth ministry to usher in the kingdom where daily bread, release from debt and deliverance from temptation and evil is not just for some but for all? How might white youth ministers like me actively partner with those who are hurting -- listening and following their lead in transforming the world to be the kingdom of God we plead for in the Lord’s Prayer?

Praying the Lord’s Prayer is a call to a new way of being in the world. Today, in the United States, in our communities, in our churches, and even in our white youth ministries, we need a new way of being. We need to speak honestly about our histories, repent of and repair the harms inflicted, and live the prayers we speak.