After the election, faith leaders must fill the vacuum of moral leadership

Kelly Brown Douglas is the Dean of the Episcopal Divinity School at Union and the Bill and Judith Moyers Chair of Theology at Union Theological. She is also the Canon Theologian at the Washington National Cathedral. 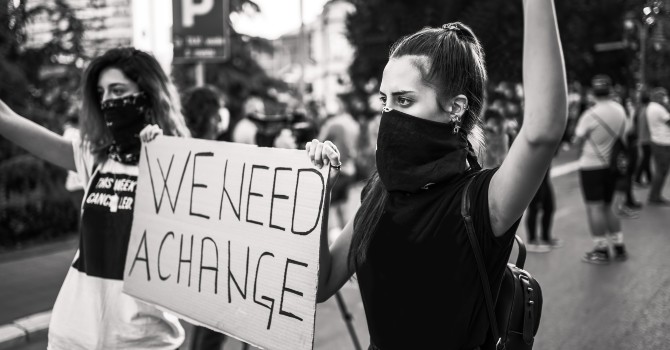 In the battles over the soul of the nation, faith leaders must bring God’s vision of justice and reject America’s sin of white supremacy, says a theologian and priest.

Leading up to Nov. 3, 2020, pollsters predicted a landslide victory for Joe Biden. What actually happened was a closely contested election.

As in 2016, many faith leaders have been surprised and disappointed by Donald Trump’s success and the percentage of evangelical and mainline Protestants who voted for him.

Kelly Brown Douglas is not surprised.

Douglas, who is dean of Episcopal Divinity School at Union and the Bill and Judith Moyers Chair of Theology at Union Theological Seminary, says that the election reveals “the war over the soul of this nation.”

On the one hand is the democratic vision that America is founded upon, with freedom and justice for all. On the other is the actual foundation of America, with its embedded ideology and practice of white supremacy. These two sides are at war with one another, Douglas says.

The role, then, for faith leaders -- both after this election and always, she says -- is clear. They must reject the United States’ conception of justice and work toward God’s vision of justice, which truly does give equity to all.

Douglas has published several books, including “Sexuality and the Black Church: A Womanist Perspective” and “Stand Your Ground: Black Bodies and the Justice of God.” She also serves as the canon theologian at the Washington National Cathedral and theologian-in-residence at Trinity Church Wall Street.

Douglas spoke with Faith & Leadership’s Chris Karnadi after the election about the state of the nation, a womanist perspective on America’s politics, and how faith leaders can begin to knit divided communities back together. The following is an edited transcript.

Faith & Leadership: In this election, it wasn’t simply Biden versus Trump. What do you think has actually been at stake?

Inasmuch as one may suggest that it was a reflection on the character of two men, it’s actually a vote about the character -- the soul and the essence -- of this country.

I’ve written about it and said before, even in response to the runup to this election, that this country is in so many respects at war with its own soul.

The founding fathers gave a vision of a democracy, even in spite of their limited understanding, where there would be freedom and justice for all, and the inalienable rights of life, liberty and the pursuit of happiness would be respected.

Now, we know that their “all” didn’t include people of color -- specifically, Black people. It didn’t include women in most respects. But part of what’s important is that they gave voice to this democratic vision.

This vision actually conflicts with this nation’s foundation, which has white supremacy embedded in its structure and systems. It’s through that framework that I say it’s no accident that Trump, with his vision of “Make America Great Again,” would indeed emerge in this country, because that’s in our DNA. That genie, if you will, has been let back out of the bottle through him, but he reflects what has been the case from the beginning.

So what this election was about is whether or not we want to continue to be a white supremacist, American, or more accurately, Anglo-Saxon exceptionalist nation, or do we want to be the nation that lives into its democratic vision and its better angels.

It seems to me that’s the war over the soul of this nation. What we’re seeing even now with this election is that we don’t have the landslide that was predicted. We’re seeing a close election. And it seems to me that what we are actually seeing is our engaging in this 21st-century version of the Civil War, where the nation has to make a decision about who it wants to become.

As the results came in and the celebrations began, I was struck by the palpable reality of the narrative which fights white supremacy.

My great-grandmother was born into slavery, and I don’t know if she ever got to vote. My grandparents got to vote, but they didn’t have that opportunity for a long time. And my own parents didn’t live to see our first Black president.

None of those persons would have ever dreamed of a Black president and a Black female vice president. That’s the battle between the two narratives in this country.

As a people, we simply have to make a decision as to which story we are going to write. And the faith community has to be in the forefront of determining which story this nation is going to complete and write.

F&L: What would be a womanist perspective on the election?

When the people who have not experienced justice say, “That looks like justice,” then we know we are on the arc that bends toward justice. If we don’t start with those voices and the reality of the marginalized, then we begin to confuse justice with privilege.

The people who have experienced privilege in an unjust system built by white supremacy -- those aren’t the people that we need to listen to to understand what justice looks like. Womanist theology takes that seriously. And theologically, that’s what Jesus calls us to.

In a womanist analysis of this election, let’s be clear that Black women saved Biden’s candidacy.

We don’t recognize how significant the Black female vote has been to rescuing the democracy of this country. In fact, we can see that those people who have been on the underside have been the ones that have continued to rescue this democracy.

We’ve taken for granted the Black female vote until we need the Black female vote. So we are looking at the electorate in places like Michigan. That win has come through urban centers like Detroit and Flint, where people of color and Black people, Black women, are. In Pennsylvania, we’re looking in Philadelphia. In Georgia, we’re looking in Atlanta and Fulton County, where Black people are.

And who are the most likely people to vote in the African American community? Black women. Black women have rarely voted at a percentage under 55%, and we are typically 85% to 90% Democratic in our vote.

A womanist would say that this democracy has rested on the backs of Black women for a long time. That’s a womanist analysis on this election. Whose back is this democracy resting on?

F&L: What do you think we’ve learned about American Christianity during this election cycle?

KBD: If we see the truth that it is at war with itself, this means that the faith community is now challenged -- challenged if not indicted by this, because this has happened on our watch -- to be in the forefront of moral leadership. We are called to have more courage if indeed we are going to lead this nation toward its better angels.

We’ve got a lot of work to do. There is a vacuum of moral leadership, and that rests on us as faith leaders and the faith community. We have not done our job. We have not played the role we need to play in this country and this society.

We are not accountable to understandings of justice that emerge from out of our society. We are accountable to God’s more just future, and that’s what we always have to lead with.

We need to be in the public square, and we can’t be timid. We’ve got to talk about the way in which we need to move forward, and we’ve got to be willing to name the original sin of white supremacy by which this country is being held captive.

This nation will continue to be held captive by that culture of sin unless the faith community steps out and says something about it and leads us in a different direction.

F&L: There’s been so much polarization recently. Do you think unifying people should be a goal for faith leaders?

Unity follows justice. Not the other way around.

So this means that, yes, we have to really understand the places where people have felt most deeply alienated from each other and disempowered. I do think that we do have to bring this nation together, but we can’t bring the nation together around the false premises of unity when we’ve still got the original sin that is white supremacy in our very foundation that has led to all of this inequality.

F&L: How do you think faith leaders can be taking care of themselves in this long, long road to justice?

KBD: We have to take care of ourselves spiritually and maintain -- whatever we do, to remain connected to that which is greater than us.

Here’s what I know: it’s so important for faith leaders to be out there, because something transformative happens when we’re out there. We know that when we’re out there fighting for justice, a spirit, a power greater than ourselves, comes with us. And we have to do whatever we need to do to stay connected to that, be it through prayer or whatever other ways we each have.

And then we can’t forget the joy that is life. Life is meant to be a joy. We need to take a breath and enjoy -- look around and appreciate and enjoy God’s creation.

If we do that, if we step back and enjoy, then it also allows us to understand that everyone else has the right to be able to take a breath and enjoy the richness and the joy that is God’s creation and realize that not everybody has that right in this country to take a breath.