Everything is about stories 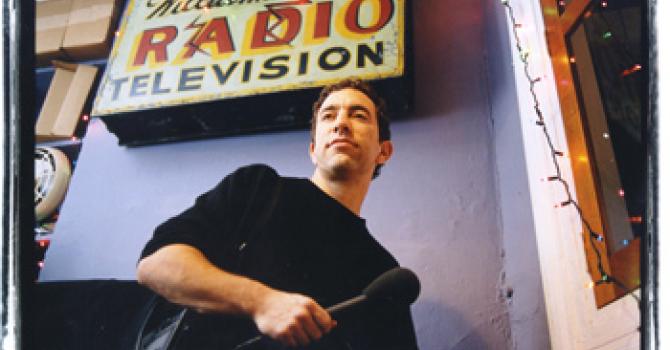 There is no more important thing you can do than to get other people to tell you their stories, says the founder of Radio Diaries.

Joe Richman wouldn’t want to document his life for a year with an audio recorder, but that doesn’t stop him from asking others to.

As the founder of Radio Diaries, he has asked dozens of individuals ranging from prison inmates and judges to nursing home residents and adolescents with Tourette syndrome to keep audio journals of their lives for up to a year.

With Richman’s guidance, they have recorded daily musings, interviewed people they know, and captured the sounds of their everyday lives. And Richman has edited the raw audio to make radio documentaries for National Public Radio’s “All Things Considered.”

Those documentaries include “The Last Place: Diary of a Retirement Home,” as well as the series “Prison Diaries” and “Teenage Diaries.”

“My natural tendency is to hide a little bit behind the tape,” said Richman, who worked for the NPR programs “All Things Considered,” “Weekend Edition Saturday,” “Car Talk” and “Heat” before founding Radio Diaries more than 15 years ago. “I’ve always done pieces that emphasize the tape and the characters and the stories. The mission is to get people to speak in their own words and to tell their own stories.”

Richman spoke with Faith & Leadership about how to tell stories, how to draw out other people’s stories, and the role that storytelling can play in institutions. The following is an edited transcript.

Q: Why radio documentaries? What do they offer that you don’t get in print or in film or on television?

Radio is such a medium of characters. We really hear people in a way that I think can be truer than the way we read about them or the way we see them on television or film. The voices tell a lot, and there is a lot between the lines.

It has been said that radio is an intimate medium. In good radio storytelling, you can get to know people in a way that feels sometimes deeper than in any other medium.

It doesn’t mean it always happens, but there’s an opportunity for that. There is something about the magic of the real power of radio that can really transport you into people’s lives.

Q: You have produced radio diaries involving teenagers and the elderly. What have you learned about the different ways younger people and older people tell their stories?

One of the great things about teenagers is that they feel like whatever they say, it’s important. Once you start doing the stories with grown-ups, they don’t always feel that way. What about my life is worth broadcasting to 12 million people?

We did a diary in a retirement home years ago, and that was really interesting. Some of the elderly there had done very remarkable things and certainly led interesting lives, but they said, “Why would anyone want to hear my story?” You don’t have that problem with teenagers for the most part.

Q: How do you get people comfortable enough to share their stories?

I find there are different reasons. For Laura [who had cystic fibrosis and was 21 years old when she recorded her life for “My So-Called Lungs”], she wanted to live on. She knew she was going to die at some point, and she wanted her memory to live on.

For Thembi [a 19-year-old in South Africa with AIDS who recorded her life for a year for “Thembi’s AIDS Diary”], I think her interest was the stigma inside Africa about AIDS. She was young and beautiful, and when she would tell people that she was HIV positive, their jaws would drop, because they had these stereotypical images. And no young people were talking out about AIDS, so for her it became a political issue.

For others, it may just be about sharing their personal story. Every story is different, but when people feel like their story is being treated respectfully and with dignity, I think all of us want to share our stories.

Q: You have said that you have developed a radar for detecting authentic and real stories. How does someone go about developing that radar?

I think that radar comes from knowing the people. When I go out and do a quick interview with others, it’s a lot harder to tell what is really them versus if I’m following someone for more than a year and I have 40 hours of tape.

I can also tell because so much of it is between the lines. It’s not just the words they say. It’s how they say it. It’s what they don’t say. It’s the pauses. The information between the lines -- that stuff is really important. It’s the emotional truth, and sometimes it’s hard to pick up on that or get a feel for where that lies unless you have enough time and enough tape.

Q: For many of the documentaries you produce, you hand a recorder over to someone and ask that person to record his or her life for six months or a year. Why this approach? Why not just interview the person or follow him around for an extended period?

There’s something so intimate about radio. When you can cut out that middleman -- me or the reporter or the host -- and have someone like Thembi or Laura talk directly with the listener, it puts them in the passenger seat.

Someone is stuck in traffic driving home from work, and all of a sudden they are hearing this young girl from South Africa with AIDS. They’re not hearing me tell them about her. They’re hearing her, and there is something so much more direct about that. It’s about getting people to know people that they don’t know.

Q: Why is that important?

What is that quote? “An enemy is someone whose story you haven’t heard.” Fear and hate and misunderstanding all come from not seeing people as real human beings. Stories help to make people three-dimensional.

Q: How do you draw out other people’s stories?

You have to be curious. Without a doubt, though, the most important thing when you’re interviewing someone is to make it a conversation so it’s not just questions and answers, but it’s a dialogue. When people feel like it is a conversation, they feel like they are being listened to.

Q: What are the keys to being a good storyteller?

There are different kinds of good storytellers. When I first started doing diaries 15 years ago, I thought I had a pretty good idea of who was a good diarist and who wasn’t. As the years have gone by, I have less and less of a good idea who’s a good diarist and who isn’t, because it’s not necessarily just the funny, extroverted good talkers. They are one kind, but then there are also the ones who are quiet, intimate, and they draw you in and make you lean closer to them.

Partly my job is about getting people to play to their strengths and pushing them with the things they’re not as good at and not as comfortable doing. But mostly -- about what makes a good storyteller -- it’s about honesty and curiosity.

Q: What should people in leadership positions keep in mind about storytelling?

Everything is about stories. It’s the way we communicate and the way people receive information. So whether it’s radio storytelling or any kind of storytelling, the stories we tell about ourselves are important, too. We’re so used to the stories of celebrities and politicians, but it’s really important to make sure to hear the stories of ordinary people.

Q: What role should storytelling play in institutions like the church?

The act of interviewing people and having people share their stories -- you can’t lose. It’s a valuable thing, whether it’s through a microphone or a pen or a video camera. Just the act of someone listening and paying attention -- having your story heard and respected and paid attention to -- is a powerful thing, both for the storyteller and for the listener.