Writer and researcher
The Rev. Alexis Carter Thomas is a writer and researcher who lives in South Carolina. She has served in campus ministry at various universities, as a pastor of discipleship and as an adjunct instructor at Phillips Theological Seminary. Currently, she is a church consultant in matters of discipleship and race and an adjunct professor in the department of history and philosophy at Lander University. Thomas received her M.Div. from Duke Divinity School. 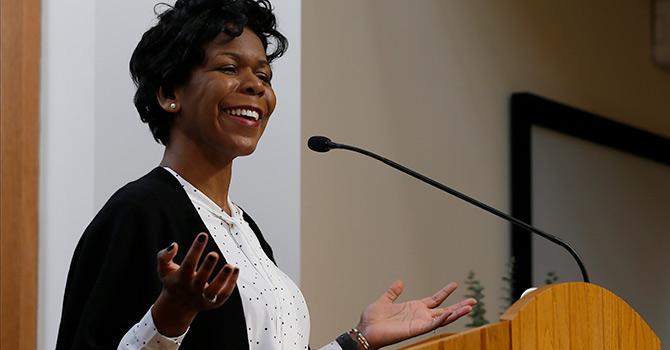 Intentional self-care, a church’s ethos of care and congregational openness to new approaches are notable factors that contribute to the thriving of Black clergywomen, a researcher has found.

Not too long after I joined the pastoral staff of a church, another team member gave me some feedback from our senior pastor’s wife.

“The pastor’s wife is uncomfortable with you sitting in the chair next to her husband,” the staff member told me -- she feared that congregants would think I was his wife.

I sat in the pulpit’s second row for the next five years. Hyperaware of my presence as a single woman on the pastoral staff, I never spoke about this conversation again.

I often felt alone and misunderstood, and I wondered, do other Black clergywomen experience such challenges? I resolved to find out, and applied for a Reflective Leadership Grant(link is external) to conduct an ethnographic study of Black clergywomen.

I wanted to explore the challenges, but I also wanted to talk to women who were flourishing and cultivating space for other women in ministerial leadership. I focused on the question, What makes Black clergywomen thrive?

I interviewed 11 Black clergywomen and 25 congregants, along with scholars whose work includes areas of Black women and religious studies. There were seven denominations represented.

During my research, I came to realize that I was not alone in my challenges.

The Rev. Dr. Renita J. Weems aptly articulated the shared experiences of a majority of interviewees when she told me, “Black women, especially single ones, make the best work mules -- grossly underpaid and obscenely overworked. We forget our boundaries because Christianity and ministry have elevated sacrifice and silence in women as a virtue. Women have to learn the importance of boundaries, saying no and saving parts of themselves for themselves.”

Yet that’s not the whole story. In spite of the opposition that Black women have faced for centuries, I saw that they are dismantling that which is destructive, oppressive and seeks to limit their thriving.

I heard many hopeful stories. Women are refusing to give most of their time and energy to demanding respect or legitimizing their work, instead devoting themselves to preaching in pulpits, writing books, transforming communities through social activism, traveling abroad and living dreams that would have seemed impossible to their ancestors.

I am sharing some of the findings of my project, from which I identified three key factors that contribute to the flourishing of Black clergywomen.

Black clergywomen who flourished were not only committed to providing care for communities; they prioritized it for themselves. They were committed to rituals, rest, friendships and activities that nourished their souls.

“We [Black female pastors] try to bear [the] whole world and lose ourselves. … Joy has to be our active form of resistance,” said the Rev. Cece Jones-Davis, who serves on the pastoral staff at The Table in Oklahoma City.

She said that part of her routine was watching a comedy show before going to sleep, “even stuff that’s not good, because I need the lightheartedness before I can rest.”

Others learned to ask for what they needed to thrive, including sabbaticals, therapy sessions and, in some cases, travel funds for a spouse or a child to accompany them to ministry engagements.

Black clergywomen flourished in congregations that had an ethos of caring for them. In these spaces, they were paid well, and their contributions were valued and respected.

Elders and other congregational leaders understood the importance of supporting their well-being, including paying for professional and personal development.

Yet even where Black clergywomen were flourishing, they were often carrying more than their share -- and suffering for it. Some churches claim to be progressive and egalitarian, but when you examine the roles, responsibilities and organizational charts, those ideals are not borne out in practice.

For those who hire and work alongside Black clergywomen, consider it your responsibility to assist in dismantling practices that silence, harm and prevent them from being able to speak up and show up as their full selves.

I also found that Black clergywomen thrived in places where congregations and their leaders showed an openness to dismantling systems and practices that hindered their expression of their whole selves.

In some churches, leaders were willing to re-envision and restructure hegemonic leadership and worship practices destructive to Black clergywomen -- and the wider community.

Congregants at St. Paul’s Baptist Church in Philadelphia told me about changes that happened when the Rev. Dr. Leslie D. Callahan became the senior pastor in 2009. Among them: learning to use inclusive language.

“The God-talk is different here. It is not what we were raised with or accustomed to,” an associate minister at St. Paul’s told me.

I found that Black clergywomen who were flourishing had been encouraged and permitted by denominational and congregational leadership to re-imagine new ways of leading and loving themselves and their congregations.

Their churches tended to show more signs of collaborative leadership; people in the decision-making circles did not all look alike, think alike or share the same educational and socioeconomic backgrounds.

Through making changes in liturgical practices, church governance and teachings that expand the imaginations of their congregants, Black clergywomen are modeling what it means to invite others into their liberation.

Their very work shows promise in that the life-giving traditions that have sustained Black people for centuries can be amended and overhauled to give more possibilities for the flourishing of wider communities.

What will it take for churches to consider other models, beyond the personality of one (usually male) person in the pulpit and the work of women behind the scenes?

It was not until I had the space and time to listen to the stories of Black clergywomen that I allowed myself to wrestle with the problematic situation I encountered in my previous church setting.

Why did I feel I had to stay silent? Why did we as a staff not teach people that a woman who holds power and is next in line to the pastor does not have to be his wife? Why did I move to the second row instead of working with my congregation to dismantle the prevailing assumptions about a woman’s role in the church?

I was heartened to talk with Black clergywomen who are doing just that -- taking care of themselves while changing the church. My hope is that they will not be left to do this work alone.