Natasha Jamison Gadson is an ordained itinerant elder in the African Methodist Episcopal Church and an organizational communication consultant. She earned master’s degrees from Howard University and Wesley Theological Seminary and a D. Min. from Duke Divinity School. Currently she serves Turner Memorial AME Church in Hyattsville, Maryland; previously she was on the ministerial staff at Reid Temple AME Church North in Silver Spring, Maryland. 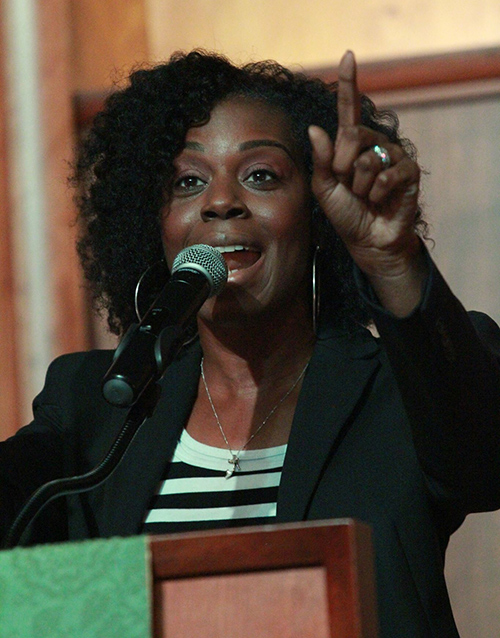 Overcoming stereotypes and assumptions has been difficult for a female minister in a historic African-American church. But, she writes, she was not serving the people by trying to be what others wanted her to be.

I love serving at a historic church with a storied past. I thought about this on Resurrection Sunday morning, when I stood alongside my clergy colleagues and looked around.

The mass choir, all dressed in white, sang, “He decided to die just to save me.” Choir members filled the length of our ornate altar draped in white fabric, while the ministers lined the pulpit behind them, also in white robes.

It reminded me of how African-American churches are often depicted in movies. The moment may have looked completely scripted, yet I know that the joyful shouts of praise and exuberant worship were unquestionably authentic.

I love the fact that my church’s narratives include a rich legacy of both lay and clergy who have served through the years. Typical of many midsize churches, ours is a family church. Most of the members are related, by blood or by marriage, to others in the congregation. Many were born into this worshipping community.

They can point to generations of family members who faithfully served before them and have raised their children to continue that legacy -- something I’m proud to be a part of.

Yet serving a historic church also comes with its challenges, particularly for a woman in ministry.

I know I’m not alone in this -- a video produced by United Methodist pastor Stephanie Arnold documents what many ordained women experience.

But my intersectional experience as both African-American and woman includes an additional layer of frustration, because of our cultural norms.

African-Americans are known to place high value on age and the wisdom of experience, and in the black church, we hold our clergy in high esteem. But that esteem sometimes doesn’t extend to me, because I don’t fit the expectation of what an African-American pastor looks like.

Although our staff has consistently been gender balanced, I’ve been told on numerous occasions that we need more male clergy.

That’s because the prevailing stereotype of ordained leadership is still male and/or older than 50 -- and I am the only minister on staff who does not fall into one of these two categories.

I’ve endured invasive questions about why my husband and I don’t have children. On Father’s Day, several people commented that they thought my husband would be in church -- even though he is not a member and has never visited.

Despite being in my mid-40s, highly credentialed and ordained for more than a decade, I am often not viewed as a competent leader. Many members are more comfortable seeing me as daughter, little sister or girlfriend. These are roles I vehemently reject, particularly since our ministerial training discourages making the church your social circle.

It has even been suggested that I stop covering my gray hair or become less personable if I want to be respected in my role.

Outside partners such as community leaders often assume I am the pastor’s assistant and have on occasion referred to me as “good help.” Funeral directors are often surprised to find that I’m the officiating minister and will sometimes make that known with a sweet but condescending “bless your heart.”

I have found that there is not a lot of support in my context for defying these stereotypes.

Often, the issues facing black women clergy get overshadowed because we are expected to align ourselves with the fight for racial equality and social justice. Consequently, gender discrimination within our churches and denomination does not get addressed, and it becomes much harder to change people’s mindsets.

Being a clergywoman in a traditional setting can make you doubt your own worth. Early on, I downplayed my contributions and achievements so others would be more comfortable with my presence. I tried not to make mention of my doctoral studies and felt apologetic when I did. I opted to be called Rev. Gadson or even Rev. Natasha to blend in with my colleagues.

I even felt uneasy correcting members who simply called me by my first name, even though informally addressing clergy is considered inappropriate in African-American church culture.

But I quickly realized I was not serving the people, nor was I being my authentic self, by trying to be who I felt others wanted me to be. My moment of clarity came when it became part of my role to approve and deny the ministry plans of ministry leaders. Some were surprised and even frustrated by decisions I made, because they confused my friendliness with my authority.

I ultimately had to decide that being respected was more important than being well liked.

I embraced the understanding that my call is to serve and provide leadership, not to be well liked or accepted.

I immediately made some adjustments by setting boundaries and getting clear about what I believed to be my assignment. For example, I don’t allow myself to be coerced into participating in youth events -- another assumption about women in ministry -- or other things outside my scope of responsibility.

More importantly, I embraced the understanding that my call is to serve and provide leadership, not to be well liked or accepted. To my senior pastor’s credit, he consistently supports and affirms my leadership, even in the smallest of ways -- such as addressing me as “Dr. Gadson.”

Although I still struggle sometimes, I’ve become a lot less apologetic about how I choose to walk in my ministerial identity. This has allowed me a new level of freedom -- and even humility -- in my service that I never expected to find.

I laugh to myself sometimes as I pour water, carry face towels and do other things for my pastor that might incense my womanist foremothers. But I can do these things because I know exactly who I am, and I’m no longer afraid to let others know as well.

Our ordination vows instruct us, among other things, to “take thou authority.” I am grateful to have found that the courage and willingness to embrace my authority is as much an act of surrender each day as when I said yes to this call.