SENIOR CAMPUS PASTOR, GRAND VIEW UNIVERSITY
Russell Lackey is the senior campus pastor at Grand View University in Des Moines, Iowa, and also serves Luther Memorial Church. He holds the James E. Rasmussen and Duane M. Skow Chair in Pastoral Excellence and wrote the book, "Power and Purpose: The Book of Revelation for Today." He also is the project manager of The Moses Project, which is funded by the Thriving in Ministry Initiative of Lilly Endowment Inc. Lackey received his master’s degree from Luther Seminary and is currently completing his doctoral studies in Christian leadership at Duke Divinity School. 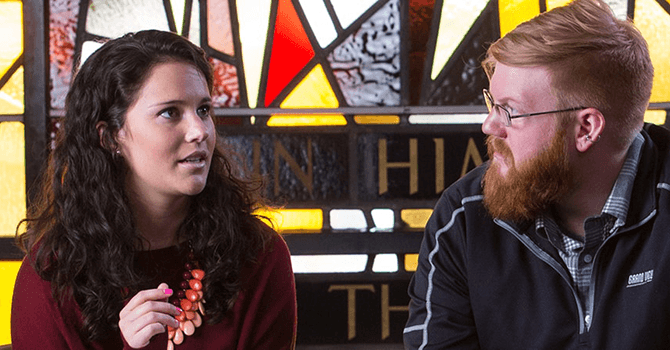 Faced with dwindling student interest in campus ministry, a pastor rebuilt by creating a “virtuous cycle” of opportunities that feed one another.

I moved from Southern California to Iowa in the middle of January to work as a campus pastor.

My first task was to start building the next year’s student leadership team. I reached out to the current members and asked whether they would reapply. All but one declined, saying they would be too busy with school or athletics to serve again. Thankfully, the president of the team did apply, but he missed his leadership interview because, he later said, he forgot.

And so by mid-February, my new team consisted of one student: a nursing major with no ministry experience who was painfully shy.

After her interview, as I walked back to my office in the snow, I found myself wondering why in the world I’d left a thriving ministry in California to be a campus pastor. This wasn’t the start I’d expected. But, as I would learn, it was the one I needed.

Like many pastors and ministry leaders, I was in a situation beyond my control. Three campus pastors had left the Lutheran-affiliated university in a four-year span. Not surprisingly, such rapid turnover had created a negative perception of the campus ministry -- and a vicious cycle of downward momentum.

The specifics might be different for other pastors -- the pandemic, a congregational scandal, changes in the community, a new option in town -- but a vicious cycle can hit anyone. Something upsets the balance of a ministry and creates that downward spiral.

When these vicious cycle moments occur, it is easy to get down, give up, search for a silver bullet or look for another job. I must confess that the last option was the most appealing to me, especially in the brutal Iowa cold.

With panic setting in, I needed a new strategy. In his book “Playing to Win,” business leader A.G. Lafley writes: “The heart of strategy is the answer to two fundamental questions: where will you play, and how will you win there?” At the time, I could not answer either question. I needed to do some research.

I examined the religious demographics of the university and discovered that Lutherans made up less than 10% of the student body.

Though students from any affiliation could serve on the campus ministry team, the narrative among the student body was that only Lutherans were welcome. In fact, I befriended a Methodist student who asked me whether he had to become a Lutheran to take part!

It was clear from the numbers that the campus ministry team needed to start recruiting students from many denominational backgrounds.

Next, I turned to the theology department faculty. Could they suggest some of their most promising students, regardless of affiliation?

One of the students they named was in the Army Reserve and would be able to make only half of our meetings. He was hired. Another, the punter on the football team, would not be available until after the season. He too was hired. A third was a first-year Catholic student with no ministry experience. But she had time in her schedule! I made her chair of the team.

Eventually, I lured two of the previous year’s team members back, giving us six for the year.

Then I focused on hiring capable co-workers on a tight budget. I called an old friend who serves as a campus pastor at a local college. He knew a graduating senior who had ministry experience, was gifted musically and -- most importantly -- could relate to students. I also reached out to the previous interim campus pastor to lead the peer ministry program.

Within four months, I had a new strategy, a new team and a supportive theology department. No longer was I walking alone in the snow wondering why I’d left California.

In the first year, attendance at chapel was mostly students invited by members of the theology department. One professor invited the whole wrestling team, and most showed up. Peer ministry events, with lots of free food, attracted students interested in learning more about faith.

By the end of that year, all eight of our student leadership positions were filled. We’d halted the vicious downward spiral.

By the third year, something miraculous happened. We went from a vicious to a virtuous cycle as the various ministries began feeding each other.

Students who came to chapel attended peer ministry gatherings. They then wanted to apply their new ministry skills by serving on the ministry team or working at the local summer camp with which we’d developed a partnership.

After a summer of camping ministry, students came back excited and full of ideas, not to mention fun icebreakers. And even better, because of our relationship with the camp, I met and hired a new employee who brought tremendous experience to the campus ministry department.

In his article “Creating Virtuous Cycles,” Dave Odom defines this phenomenon as “a series of events that have beneficial impact on the [institution’s] other events.” This is what happened to me. I didn’t set out to create a virtuous cycle when I began at Grand View. I was just trying to survive.

But as I reflect on what happened, I can see a few lessons:

It has been nine years since that first February at Grand View. This year’s team has 18 student leaders. One of my former staff members is now the executive pastor at a growing church in Minnesota. My first hire, the one straight out of college, is still with the department but now directs our high school youth theology program. And former students are carrying their leadership lessons out of college into the churches where they attend or work.

One of the most heartening examples is the story of Joel, a student who came to Grand View to wrestle.

Raised evangelical, he wondered whether he would find a place to practice his faith at a Lutheran university. He came to chapel with his wrestling teammates and then participated in peer ministry, which in turn led him to apply to be on the campus ministry team. After spending a summer working at the local camp, Joel decided to attend seminary. He is now on his way to becoming an ordained Lutheran pastor. A virtuous cycle indeed!