Midlife as a time of discovery, not a problem to be solved 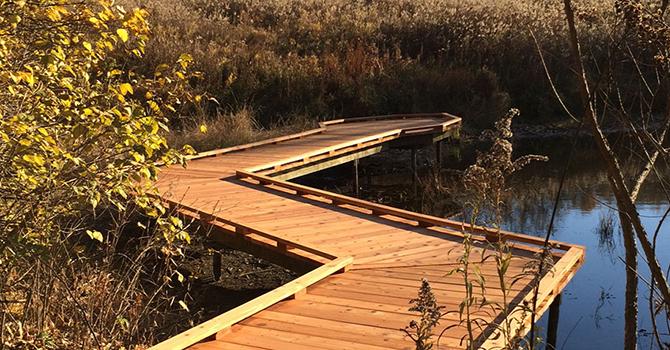 A walkway at Beechwood Farms Nature Reserve in Pennsylvania, which author L. Roger Owens visited, alone and with his family, over the course of a year. Photo by Rachel Handel

Instead of sinking into the feeling of being stuck, a seminary professor set a goal of taking 40 walks to mark his 40th birthday. He then wrote essays about the experience, reflecting on the burdens and the surprises of the middle stage of life.

L. Roger Owens was out on a walk at Beechwood Farms Nature Reserve, near his home in Pittsburgh, when he got an idea.

His 40th birthday was approaching, and he’d started to notice small signs that he was aging. His memory wasn’t as good as it used to be. His feet were hurting. He’d look in the mirror and say, “How did my dad get in the room?”

It was on that walk, the day after Thanksgiving, that he formed a plan to take 40 long walks to mark the transition from the first half of his life to the second. He then wrote essays about those walks and gathered them in his new book, “Threshold of Discovery: A Field Guide to Spirituality in Midlife.”

“Midlife is not a problem to be solved. I think that’s a learning that institutions and congregations could learn, too,” Owens said. “When we’re feeling stuck, we’re feeling there could be more going on here, this is not necessarily something we have to try to get out of.”

is an associate professor of Christian spirituality and ministry at Pittsburgh Theological Seminary and a former co-pastor with his wife, Ginger, of Duke Memorial United Methodist Church in Durham, North Carolina.

He spoke to Faith & Leadership about grappling with midlife issues, on both a personal and a professional level. The following is an edited transcript.

Q: Why did you write this book?

As I was approaching my 40th birthday, I had an idea for a practice that might actually help me live into the transition from the first half of my life to the second half of my life -- which until six months prior I hadn’t really worried about.

About a month earlier, I was talking with my spiritual director and I was saying that maybe I’m entering a dark night of the soul.

It wasn’t just my body and my mind, but it was this sense of not being sure what I meant when I said “God” anymore, not sure what it meant to experience God, and being uncomfortable with that.

She said, “It doesn’t sound to me like a dark night of the soul. It sounds more like a threshold of discovery.”

I wanted to be intentional about moving into this phase of life. [This experience] would give me space to explore, reflect and read books, talk to other people, kind of mark a transition.

It was a threshold, stepping into the second half of life, into these middle decades. It made me think of that whole middle part of life, the whole 20 years, as a threshold itself. It’s not like you get past a threshold, but you live into it. It can be a fruitful, liminal space.

Q: But it doesn’t always feel that way, right? It’s common to seek a change at this point in life.

I have used the image of claustrophobia, kind of feeling stuck in the middle, and contrasting that with Barbara Bradley Hagerty’s book “Life Reimagined.” She was researching literature on midlife, brain imaging, and she says brain imaging is proving that we’re wired for novelty.

I kept coming back to that, because the spiritual tradition that I’m drawn to is the Desert Fathers and Mothers -- monasticism that values stability and fidelity to place and people.

In the Christian tradition, there is a fruitful, spiritual tension between pilgrimage and stability, between the wanderer and the monk.

Q: In some ways, this is a personal book for you. Would it be helpful for Christian leaders professionally?

It’s not unlike being in a relationship or a marriage for a particular amount of time. It’s boring and it’s annoying and it’s frustrating and it’s here-you-are-doing-the-same-thing-again.

When that feeling strikes, our culture encourages us to say, “I’ve got to do something different. I’ve got to try something new. I’ve got to go someplace else. I can’t let this hamper my freedom.” We’re wired for novelty, so all of the input we get says, “Flee and find something new.”

I think one of the things leaders could tell themselves when they’re in that place is that at some deep level, we’re also wired for fidelity.

Christian theological tradition might say our tendency toward sin masks the deeper desire for fidelity modeled by God’s fidelity to us. So what would it mean when we’re in those places to ask the question, “What would reinvesting in fidelity look like here?”

A useful distinction is between novelty and creativity. Novelty says, “I want something new, something different, someplace else.” Creativity says, “Within the frame I’ve got, what are the possibilities I couldn’t have imagined?”

It doesn’t immediately give in to that boredom and restlessness, what the monastic tradition calls “acedia.”

Q: You undertook this project but did not do something dramatic like hike the Appalachian Trail or walk the Camino de Santiago. You decided to hike the trails in a nature reserve near your home. Why?

I suspect that people who do the more adventuresome things are maybe a decade younger than me. When you’ve got a family and you’ve got children, you can’t just pick up and go. Even the project itself modeled the realities of a midlife stage.

I’m learning that my inclination is toward restlessness, toward fleeing. The choice to stay close by was fidelity to place and people and life as it is now, and not trying to find an escape that’s going to solve my problems for me.

Am I going to go away for a while and get out of my life to get some perspective on it? Or am I going to turn toward what I have, where I am, what I’m going through, and see what the potential is and what I’ve already got?

I was just making that decision to do the latter.

Q: So what did you learn from this experience?

These frustrations -- the boredom, the annoyances, the fears -- they don’t need to be solved.

Midlife is not a problem to be solved. I think that’s a learning that institutions and congregations could learn, too. When we’re feeling stuck, we’re feeling there could be more going on here, this is not necessarily something we have to try to get out of.

I learned that when we decide not to solve the problem of midlife but to live into it and be with it and acknowledge it and face it, there’s just real beauty and potential and mystery.

Q: How did you explore these ideas through walking?

I could have taken a different walk every week and gone to some other nature reserve every time, but I’m going back to the same place and walking the same trails. I mean, it has wonderful, nice trails. But it’s not a huge place.

I’ve learned from Buddhists and meditation of mindfulness [to ask myself], “Can I see this with a beginner’s mind?” This actually is not the same place it was last week, even though it feels the same.

Maybe we can ask the same questions about the institutions or the people we live with or work with. When I walk into work today, in a way, of course, they’re the same people. But also, this is a new moment. This is new. So there is novelty built in, even in the repetition, if I have that perspective.

If you do it with intentionality, that pause and act of blessing allows me to say that this moment, this place, has a potential that I might not recognize if I just see it as a routine I’m stuck in.

That sacred pause, turning our attention to the present and to the body being right here in this moment allows us to appreciate it. I think there’s a divine depth and potentiality in this moment even if I don’t really want to be here.

Q: What surprised you most about the project?

The joy I discovered in it. I’m not a naturalist. I like being outside, I like taking walks, but I’ve never been a nature person. But I would get to Beechwood Farms and, most of the time, I was so glad to be there.

I remember a few years ago visiting Niagara Falls. When I finally saw the falls and heard them, I started to cry. I was like, “Where did that come from? This is not Roger.”

It was that kind of surprise -- finding joy in this place even when it was muddy and snowy.

The other place of joy -- if you read the book, you know that this was my project but it was also my family’s project.

My kids became very interested in this, and they went on a lot of walks, and they enjoyed it, and they asked me about how it was going. In fact, I dedicated the book to them, because they spent so much time with me.

I gave them each a copy of it, and I said, “I don’t expect you to read this, but someday you might like to have it.” And one of my kids said, “I was hoping I would get one of these.” It just warmed my heart.