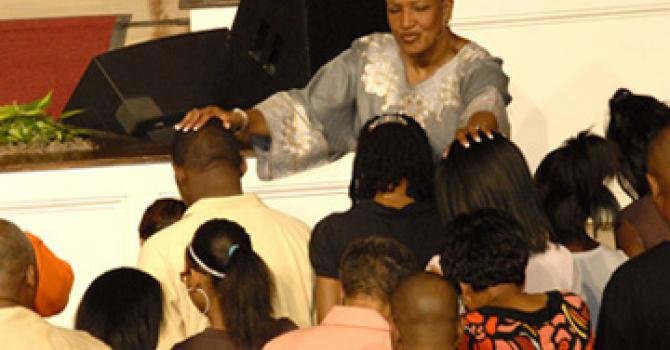 As a black woman in ministry, the Rev. Cynthia Hale has faced doubters throughout her career. But today she is the founder and spiritual leader of a 5,100-member Georgia church.

Editor’s note: A version of this story appeared in the Winter 2009 issue of DIVINITY Magazine.

At an evangelism program in her hometown of Roanoke, Va., 9-year-old Cynthia Hale turned to an adult family friend and asked, “Is God like my father?”

“Yes,” the friend told her. “He is just like your father.”

Nearly 50 years since she accepted Christ, the Rev. Cynthia Hale is the founding pastor of a 5,100-member megachurch in Decatur, Ga., with a budget of $4.5 million. A profound achievement for any pastor, it is virtually unheard of among African-American women in a world where race and gender remain challenges to leadership in and out of the church.

There were challenges along the way, including those who questioned her call. But Cynthia Hale was ready to answer every skeptic.

“Some people are just negative,” Hale said. “They’ll try to shut your dreams down. I’ve always believed that I, along with other people, could change the world for Christ.”

Hale began Ray of Hope Christian Church in 1986 with a small Bible study in her living room. The Ray, as it is called, today draws 1,500 worshippers to its two Sunday services, many moved by the charisma and widening reputation of its leader.

And, while African-American women have had some success in getting their own churches, Chaves said many of those congregations are outside of mainstream denominations and are small.

Such numbers mean little at The Ray, a Christian Church (Disciples of Christ) congregation. When members are asked whether a woman is able to preach the word, Hale said their response is short and sweet: “She does it every Sunday.”

On Sundays, between services, the upbeat vibes are unmistakable as Hale shares hugs and conversation with folks outside the auditorium-style sanctuary.

Ray member Will Finch first met Hale 13 years ago at a church in Euclid, Ohio. She was there to speak. He was the guy who was supposed to turn on the microphone, “supposed to” being the operative phrase: “She has a look that she gives people like, ‘You better get it together.’”

Having seen the no-nonsense side of Hale, Finch now drives 50 minutes from his home in Loganville, Ga., because he is drawn to her more pastoral side. He has gone from 325 to 265 pounds after Hale preached on the importance of exercising and eating well. A patient-sitter at nearby DeKalb Medical, he started double-tithing after Hale’s sermons convinced him that giving is the only real path to prosperity.

Arlie Holliday, who is divorced, draws comfort from the fact that Hale, who has never married, “understands the struggles.”

Hale encourages single women to find intimacy through their relationship with God and their family. And she reminds them that this is just a season -- though, laughing, she adds that for her it is becoming “an eternal season.”

Holliday makes another point about Hale that is irrefutable, given the fact that the pastor is a gifted orator who stands 6 feet 3 inches in heels. “When she walks in a room,” Holliday said, “you know it.”

‘God was going to use me’

At nearly every step, Hale faced challenges she had to overcome to succeed in ministry. There was no single turning point as much as a series of turning points: The civil rights struggle and murders of President John F. Kennedy and the Rev. Martin Luther King Jr. as she was growing up opened her eyes to the harshness of the world beyond Roanoke. In her own life, that harshness took the form of people’s doubts thrown in her face.

She grew up singing in the choir at Loudon Avenue Christian Church and embracing ministries such as Youth for Christ. Her home life was a fulfilling blend of the secular and spiritual that reflected her parents’ fun-loving nature.

But her father, who retired after 20 years as a waiter for the railroads and later opened his own catering business, had doubts about his daughter’s chosen path.

Harrison Hale, now 85, was skeptical that it would become a lifelong commitment for his oldest child. “I honestly didn’t think that she would stay with it,” he said. “She proved me very wrong.”

Growing up, Hale says she was an eager evangelist. “I was so excited about being a Christian.”

Then at Hollins College, a private liberal arts college in Roanoke, Hale struggled with accepting the call to preach. “I had not seen any women do that at all,” she said. At the time, she dreamed of becoming an opera singer.

She remembers another uncomfortable feeling -- being one of the few women of color at Hollins. She recalled, then, the weight of a double challenge, an African-American woman further set apart by her determination to become a preacher and use her pulpit to end the racism she felt was pervasive.

“God was going to use me in some unique way to change his world,” she said.

Hale spent seven years as a chaplain with the Federal Bureau of Prisons, work that prepared her to handle budgets and bureaucracy. Working with criminals also toughened her: She can, by all accounts, run a meeting, put out fires, and deal with the politics and personalities that are part of every church.

On a typical Sunday, after preaching two back-to-back services, Hale returns to her office. During the second service one Sunday, a first-time visitor dressed in cut-off blue jeans had answered the altar call.

When Hale asked the men of the church to come forward to pray for him, more than 100 men responded enveloping the stranger in prayer. Soon, Hale, the men and the rest of the congregation realized the man was deaf.

“That’s what got to me,” Hale said afterwards. “We had to communicate God’s love to him through sign language.”

Hale acknowledges such moments often bring her to tears.Yet more often than she cries, Hale laughs -- either over something at church or in her life. Her willingness to reveal and share what she is feeling and thinking endears her to many, said former Duke Divinity School classmate Michael Battle, president of the Interdenominational Theological Center in Atlanta. “Cynthia Hale has a magnificent presence.”

It is nearly 1 p.m. Hale has been at church since the sun came up. She has preached two sermons. She has shed tears, as usual. But she is soon smiling as she raises her arms high in a V and says, “The congregation loves when I do this. That’s my signature ‘Hallelujah!’”

That one word, an exclamation in her case, is the answer to the question she posed as a 9-year-old girl.

It is her response to the challenges she meets in life.

Every time she faced a question about her call or her qualifications to start a church, she’d look to God.

“I always felt God leading me to respond, ‘You tell them I called you.’”