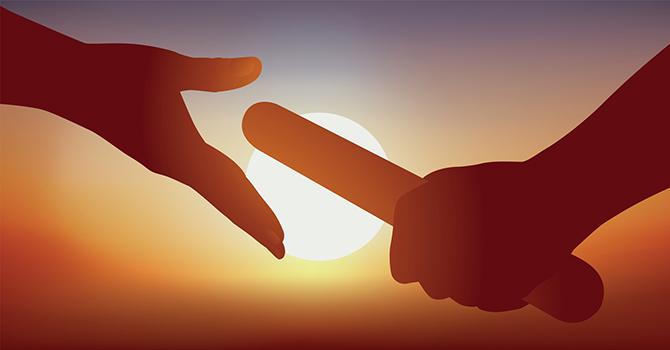 What if we imagined pastoral transitions as a relay race, in which each leader passes the baton to the next? asks a Baptist pastor.

On a cold winter day, I was talking on the phone with a colleague about the church where I serve as pastor. I was feeling frustrated. I told him I didn’t know how to move the church where God wanted it to go.

I had lots of questions: Where’s the infrastructure? Who’s in control? How do the bylaws function? What happened in the past?

“I wish I could find the ‘letter’ from the previous pastor,” I said. I was talking about the tradition of the outgoing U.S. president leaving a letter(link is external) of advice and encouragement for the incoming president.

Needless to say, like many pastors and leaders across the nation, I didn’t receive the letter I so longed for.

The previous pastor led my church for at least 25 years, then fell ill and died. The church continued to worship together for four years without a shepherd. The diaconate did their best to keep the church churning along. Some would suggest that this is the Baptist way -- there was no interim pastor or minister.

When I was elected to lead the church, I wondered what it had been like under my predecessor. Of course, I got 15 or more versions of what had happened -- but these were just opinions. As I sat at my desk, I wished there were a letter -- or even just a memo -- on how the previous person had led the church.

I believe that the way we plan for leadership transitions helps prepare the way for future success. My experience makes me wonder what would happen if a leader could pass the baton to the next person with a moment of shared effort between the two.

My favorite race is the relay. The team of racers has to be in sync. They have to comprehend that the goal is to get the baton across the finish line -- and work together to make sure it’s not dropped. A runner can have a personal best but still lose the race if the baton does not cross the line.

If our goal as pastors and leaders is to bring God’s kingdom on earth, then we are always looking to pass the baton until God’s vision is brought to fruition. The mission and vision of the organization should always be at the forefront of leaders’ minds as they each play their roles in the relay.

Maybe your job is to be a good leadoff person. Or the second or third runner, covering the greatest distance. It could be that God called you to be the anchor and to finish strong.

The position or role doesn’t define who you are personally. But it should help you recognize that you’re a part of a bigger team goal. That goal is to fulfill the vision and mission for which God assembled the organization.

Last year, the Black church witnessed a monumental transition at a powerful church in Chicago called Fellowship Missionary Baptist Church.(link is external) The Rev. Charles Jenkins announced his retirement(link is external) and his successor almost simultaneously. According to reports, Jenkins worked directly with the new pastor, the Rev. Reginald Sharpe, to ensure a good handoff.

Jenkins (now pastor emeritus) has said publicly that it was time for a young man to take the reins. After the transfer, Fellowship Chicago has continued to grow and thrive, serving the community through pop-up food giveaways, drive-up and walk-up food boxes, and more.

Sharpe, like many pastors across the country, is now transitioning his church to a virtual world; recently, one of the online services received more than 17,000 views.

Fellowship Chicago’s process of leadership transition was highly unusual. The current norm in many denominations is to allow pastors and leaders to stay in position until they decline or even pass away -- as happened in my church.

According to a 2017 survey(link is external) by Barna Group, only 1 in 7 pastors is under 40. This gap in developing leadership causes churches, nonprofits and other organizations to drop the baton in managing succession. I’d suggest that an apprenticeship model would improve leadership transitions.

Can you imagine working alongside the leader who would eventually turn the controls over to you? What would our churches, nonprofits and other organizations be like if we created such a model?

I see the apprenticeship idea supported by 2019 Barna research,(link is external) which says that planned transitions “tend to produce positive outcomes” -- yet reports that 51% of incoming pastors said there was no plan in place when they arrived, and 33% said the lack of planning caused problems as they took the helm.

An apprenticeship model would allow the established leader to shape and mold the new leader, or at least work with that leader before stepping down. Institutions are well served when such a model is put into action.

For example, Bishop Paul S. Morton, the legendary gospel singer and pastor who founded the Full Gospel Baptist Church Fellowship, stated publicly how he would transition the fellowship to new leadership -- noting that he did not want to die in office -- and then worked directly to apprentice now-presiding prelate Bishop Joseph Walker III, ensuring a smooth, successful transition.

Biblically, Moses trained Joshua to lead the Israelites into their next season. Elijah trained Elisha, and Jesus trained the 12 disciples for at least three years to spread the good news around the globe. If we take this model seriously, our churches, nonprofits and institutions will benefit.

In each leg of a relay race, there is a brief moment when two runners hold the baton together, making sure the new runner is holding its weight securely. This is the transition -- a brief handoff that allows the successor to be prepared and comfortable to run with the baton.

Passing the baton in pastoral transitions gives leaders the support and confidence they need to fulfill their individual roles in reaching the goal for which God assembled the team.