We may all be headed to bivocational ministry

Jason Byassee is the inaugural Butler Chair in Homiletics and Biblical Hermeneutics at Vancouver School of Theology. Previously, he was senior pastor of Boone United Methodist Church in the Western North Carolina Conference. He worked at Duke Divinity School from 2008-2011, writing and teaching about theology and leadership with Leadership Education at Duke Divinity and editing the Call & Response blog at Faith & Leadership for much of that time. He serves as a contributing editor to Christian Century, where he was an assistant editor from 2004-2008. He is author of Trinity: The God We Don't Know (Abingdon, 2015), The Gifts of the Small Church (Abingdon, 2010), Reading Augustine: A Guide to Confessions (Cascade, 2006), An Introduction to the Sayings of the Desert Fathers (Cascade, 2007) and Praise Seeking Understanding: Reading the Psalms with Augustine (Eerdmans, 2007). He has a master of divinity and doctorate from Duke University. He also is the co-author, with Rae Jean Proeschold-Bell, of Faithful and Fractured: Responding to the Clergy Health Crisis. 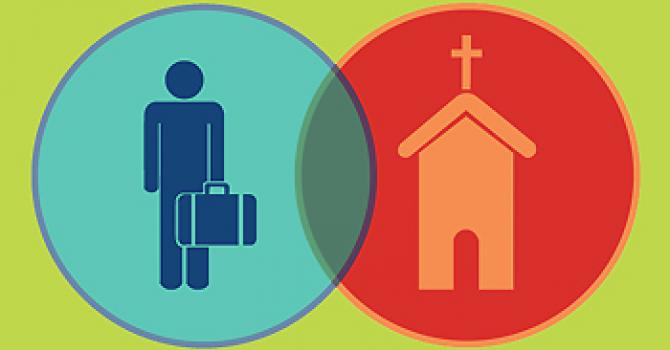 Our institutions have to become more nimble, more entrepreneurial, more missional if they’re going to have futures, says a theologian and pastor. And that means a change in the nature of ministry.

Editor’s note: This is adapted from a talk given to the Association of Presbyterian Tentmakers at Austin Presbyterian Theological Seminary in Austin, Texas, on Nov. 2, 2012.

I want to distinguish such ministry very sharply from multitasking, our age’s great distraction. I am arguing that the church as a whole, not just individuals, must recover our gift of founding institutions, generating entrepreneurship, innovating in ways that are faithful to the gospel and fund ministry. I don’t have a magic bullet, but the church is very old and very wise and has resources we can draw on.

There are hints in the prophets and Jesus of a miraculous crop -- God’s doing, but the people still have to work for it. Irenaeus looks forward to vines of 10,000 tendrils, each with 10,000 bunches of 10,000 grapes, each producing oceans of wine, which would make for quite a Eucharist. Work is a basic human good, original to Eden, continuing in the eschaton, dependent on God’s blessing. Human work is a reflection of God, the first worker.

You stretch out the heavens like a tent,
you set the beams of your chambers on the waters,
you make the clouds your chariot,
you ride on the wings of the wind,
you make the winds your messengers,
fire and flame your ministers. (Psalm 104:2-4 NRSV)

Looks here like God is the original tentmaker, stretching out the heavens like a tent. The ancient church would have read the winds, fire and flame as references to the Holy Spirit; God always works as Father, Son and Spirit, not as a cumbersome committee, but as a communion of persons in perfect mutual regard.

Every imaginable human act of ingenuity is taken up in the Old Testament to be blessed. They’re all used to describe God as a worker. God purifies Israel like a refiner, like a fuller. David is so bold as to think he’ll build a house for God, but God says, “No no no, I’ll be building the house for you.”

So God’s a builder, a temple maker, a priest houser. And amidst all this work God also rests. God is not ceaseless labor; God is also useless delight, seen most clearly in practices of sabbath. The sharpest patristic scholarship these days points to the importance of the Son’s working wherever the Father is. “Whenever my Father is working, I am also working,” Jesus says over and over in John 5. Who can do the works of God? Only one who is himself divine.

David Jensen, a theologian at Austin Presbyterian Theological Seminary, writes that “isolation in work is foreign to the triune God.” But our human work is not foreign to the triune God. Jesus joins our labors. Then he works on our behalf in salvation in a way we could never work. In salvation, God is like an artist in the zone, creating beauty, all her media responding to her desires, making something beautiful of God’s world.

Only God really works. He lets us join in, blesses our labors, takes them up into his saving work. Because God works, we can work, too.

Here’s the thing: that portrait of God working in creation and redemption, of our joining in by grace, of a city of God at the eschaton that’s a hum of human activity, can, like all theological portraits, be misused.

My fear is that it presents an image of ceaseless human work, frenzied work, without sabbath or grace. And my fear is that bivocational work can do that, too. Ah, just work more, and we’ll turn this negative (not having parishes for you graduates) into a positive and claim your exhaustion is because you’re being like God!

Matthew 6:22 is translated in the King James, “If therefore thine eye be single, thy whole body shall be full of light.” How do we work bivocationally with a single eye, not with diffused or exhausting labor, but with multiple forms of the same work?

At Leadership Education at Duke Divinity, where I have worked for some years, we’ve noticed a need to reclaim entrepreneurship as a gift from the Holy Spirit. Our institutions have to become more nimble, more entrepreneurial, more missional, if you like, if they’re going to have futures.

It’s not the worst thing in the world to close, but if our heritage still has gifts to bear to the world, so that we need to stay open for a bit, how do we make space for that?

I don’t know. But I know it can be done. We’ve done it before in our history. And some people do it now. So I want to tell some stories of folks who have. Here are some folks whose work is double but whose eye is single, as Jesus commands.

I want to tell you about the world’s best church member. Bobby Sharp is his name. He’s an economist by training; runs the office at our local university that develops long-term strategy. He’s the kind of man at Appalachian State University that’s behind anything that actually gets done, and he’s the same way at our church, serving as lay leader, teaching a Sunday school class, chairing our worship committee, chairing our capital campaign exploratory committee. We vastly overuse him, because he’s so capable.

While he was in seminary, he worked at Duke’s Ormond Center on a sociological project on the changing nature of the church. That bore fruit, as he became a demographer in real life. He studies how our town and state are changing and how App ought to change in strategy to meet those changes.

Can you see why his day job is so valuable to us as a church? App employs him full time. He pays us to come to church. And that’s why he’s a treasure. You can’t have a church without women and men like this.

Being a strategist, Bobby thinks that more bivocational ministry is coming. It offers freedom. In his sector, state funding for public education is not going to come back. Drawing security from elsewhere means one can follow a strong calling. And it allows us, the church, to help people find their passion. “Folks will stay up at night and pursue a passion,” he says. As he has.

I want to tell you about another innovator in my town, named Carson Coatney, better known locally as Stick Boy. Carson grew up as a member of a group of sectarian Christians, first in Kentucky and then in the North Carolina mountains. The group has a peculiar genius for innovation. In our town, Boone, they run several profitable fast food and dessert places. Carson was put in management positions early on as the group noticed his energy and intelligence. They even blessed him as he gained admission to and went off to Duke University as an undergraduate.

There he noticed a business opportunity: students hate doing laundry. So for a fee, Carson and his multiplying business partners would pick up laundry and go sit at the laundromat, doing their homework as it cycled, before returning it to the dorms, folded and bundled, at a handsome profit. He made a killing.

He also broadened his religious views and realized he had to leave the group. He left without their blessing and without a dime to his name. He borrowed on credit cards to open the Stick Boy Bread Company, a bakery, in Boone. Not because he knew how to bake -- he didn’t. But he knew he could learn that, so he took courses, practiced and mastered it.

And Carson gives generously to his church, to the Christian school his kids attend, to his community. Stick Boy stickers adorn cars all over Boone. He has paid that initial slew of credit cards off and expanded. The store is a hodgepodge of local Booniana -- books by local authors, locally made pasta, a signed drawing by Eric Carle, who has a house in the mountains (“Eric Carle is the very hungry caterpillar,” Carson says). Stick Boy has a second store now in Apex, N.C.

I admire these initiatives, obviously. Christians applying their gifts, utilizing virtues of wisdom and hard work, banking on a little serendipity. Their ideas and partnerships often originate in the church. Their financial success certainly goes back and benefits the church. I’m also struck by their singleness of purpose. Their entrepreneurial efforts are not a matter of multitasking; their efforts are not diffused. They have to concentrate to get good at what they’re doing. Even though they’re doing multiple things, they do them with Jesus’ single eye.

Christians have, deep in our bones, a memory of practices of entrepreneurship. This can be used for good or for ill. But it’s a sign of our creation in the image of a triune God who is forever working; of our descent from Adam and Eve, for whom work became a curse; of our lineage with the prophets, who promised a day of rewarded work; and of our formation in the body of Jesus, whose work is for our salvation.