At 90, Leighton Ford reflects on the ministry of mentoring

Journalist
Ken Garfield of Charlotte, North Carolina, has written for Duke Divinity School, The New York Times, The Christian Century, Religion News Service and other publications. He is the author of several books, including “Billy Graham: A Life In Pictures,” and also writes obituaries. 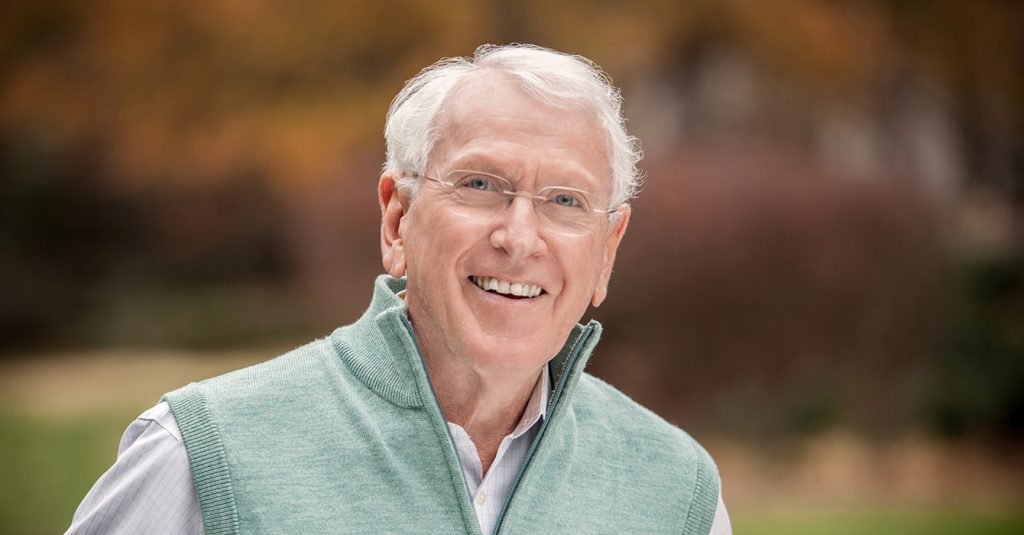 After decades of preaching at crusades, Leighton Ford turned his attention to mentoring Christian leaders. He embraces new methods while staying focused on the timeless need for a friend for the journey.

Leighton Ford Ministries is a Thriving in Ministry grantee.

“The heart of it is listening,” he said. “It’s not so much advising or consulting as listening without having an agenda. It’s three people: two of us and God.”

Ford turned 90 on Oct. 22. But he’s not slowing down, for many Christian leaders are yearning for a guide for what awaits.

Ford, brother-in-law to legendary evangelist Billy Graham, spent 30 years as an associate evangelist with the Billy Graham Evangelistic Association before founding his own ministry focused on mentoring.

From his home in Charlotte, North Carolina, Ford still runs Leighton Ford Ministries, encouraging pastors, missionaries and evangelists around the world. Many are in their 20s and 30s; others have been mentored by Ford for decades.

The Rev. Casey Crimmins, 36, is in one of Ford’s mentoring groups — four young Christian leaders from the Charlotte area. They typically meet once a quarter. Each convening lasts four hours, and Ford’s back porch is a popular gathering spot.

Crimmins, who helped plant the nondenominational Multiply Church in Matthews, North Carolina, said the agenda begins with coffee, then catching up. Ford will read a passage of Scripture, after which the group will sit in silence.

Then the four mentees take turns sharing what’s on their hearts. No concern is off-limits, including personal struggles, even with issues of sin.

Ford appreciates that mentoring must adapt to the times. The strategies that have worked since he founded the ministry in 1985 may not resonate in the same way going forward.

He has ideas about new directions. But he believes that what men and women called to ministry needed yesterday and today is the same thing they will need tomorrow: a friend for the journey.

‘What was yet to come’

Ford’s name still resonates across the Christian landscape. For decades, he worked alongside Graham, preaching the saving power of Jesus on behalf of the family ministry.

Part of Ford’s story is the personal connection to Graham: “I married his sister” Jean, Ford said, joking, “so he couldn’t fire me.”

The two have been married 67 years. Jean Ford, 89, has long supported her husband’s, and now son’s, ministry but is not directly involved.

Years ago, there was speculation that Ford might one day succeed his brother-in-law as the Graham ministry’s leader. (That job went to Graham’s son Franklin. The elder Graham died in 2018 at age 99.)

But a tragedy, and restlessness, led Ford in a new direction.

The Fords lost their son Sandy in 1981 during heart surgery. He was 21, a junior in college and a cross country runner active in InterVarsity Christian Fellowship.

“I do not believe that God brought about Sandy’s death to teach me something,” Ford wrote in his book “A Life of Listening.”

“I do believe he used it to prepare me and those I loved for what was yet to come.”

Even before then, Ford had been questioning the focus of his calling. After preaching sermon after sermon to crusade crowds in distant arenas around the world, was there something equally significant to do in God’s name?

Graham had been his mentor. Ford remembers Graham preaching at a youth rally Ford was leading in his hometown of Chatham, Ontario, in 1949.

Only one person responded to Graham’s now-familiar invitation to come forward and accept Christ. Afterward, Graham put his arm around his disappointed future brother-in-law and told him not to worry.

“Stay humble and I believe he will use you,” Graham told Ford. Surely, Ford thought as he considered his future, there are others who need an arm around their shoulder.

Years later, Ford remembered that moment when he embraced a new calling: mentoring.

Help for the long run

Ford figures he has personally mentored several hundred men and women. That doesn’t include others who have benefited from more informal encounters.

He’s known for calling or emailing people to see how they are doing. He often seeks out strangers with whom to make a connection, even for a moment or two.

Not long ago at a cafe in the North Carolina mountains, Ford struck up a conversation with a young waitress. He wound up praying with and for her.

“Little opportunities in life,” he calls such encounters.

Anglican Bishop Neil Lebhar, 71, of Jacksonville, Florida, who has been mentored by Ford for years, recently spent three days with him and others for informal conversation.

“Leighton’s a good listener,” Lebhar said, “and then he wraps things up with a perceptive question or two.”

Those conversations have led Lebhar to consider mentoring as a post-retirement option.

The organization works with church governing boards and also helps with capital stewardship campaigns on behalf of clients with whom it has worked.

A Lilly Endowment Inc. grant of $1 million is helping father and son focus on future leaders of color and those starting new churches or leading small congregations.

Another service: a 135-question survey, facilitated by the ministry, designed to gauge a congregation’s engagement with its church.

But mentoring is its bread-and-butter offering. The ministry currently supports 30 mentoring communities, each with a lead mentor, working with 500 Christian leaders worldwide. The groups balance gender, race and nationality.

Joining a mentoring community is by invitation only, and mentors are chosen and trained by the ministry.

Groups, whose members live all over the world, typically meet for an annual retreat over four to six days. There is no agenda other than prayer and listening. Between retreats, the groups meet intermittently by Zoom.

In large and small settings, the groups talk about spiritual issues. Ford sees the mentor’s role as providing, as he puts it, “safe times, safe people and safe places” to help ministry leaders keep going for the long run.

Victor Nicholson, 39, is senior vice president of Christian mission and belonging for the YMCA of Greater Charlotte. He’s part of Crimmins’ group.

In addition to meetings, Nicholson said, each mentor shares a one-on-one lunch with Ford at least once a quarter. All of it, he said, helps him step back from the daily rush and see the bigger picture.

“The Lord is present each and every day,” Nicholson said. Asked what Ford’s mentoring has meant to him, he points to Proverbs 20:29 — “The glory of youths is their strength, but the beauty of the aged is their gray hair” (NRSV).

‘Grace is the keynote’

As he listens to those he mentors, Ford said, broad concerns emerge.

Perhaps most common is the busyness of church, which can drown out God’s voice and threaten the sanctity of family life. A daughter’s Monday evening soccer game? “Sorry, can’t make it. There’s a church budget meeting.”

Also common is mentees’ failure to come to terms with their gifts and weaknesses, for fear of sharing their frailties. Being honest about ourselves can help others see themselves more honestly, Ford said. But Christian leaders worry: “Will it threaten my job security?”

And then there’s the struggle to meet their congregations’ expectations, because members don’t see the pastor as an ordinary person. “How do you please all these people?” Ford asks his mentees. “You don’t.”

The second is heavy-handed proselytizing: “Jesus is the way. But we’re not going to force anybody that way. For me, grace is the keynote.”

Abiding by those principles has been crucial to Ford’s integrity and effectiveness, said Grant Wacker, professor emeritus of Christian history at Duke Divinity School and a Billy Graham biographer.

“Leighton has consistently focused on enduring spiritual issues and not transient cultural issues,” Wacker said. “He always believed that we have our own ways to God, and he respected that.”

‘The best sermon you ever preached’

The timeless lessons won’t change, Ford said. But he believes there are fresh, new ways to share them with those we mentor — without following the latest fad.

Social media obviously is one way to bring people together from far-flung locales, Ford said. The ministry just hired Nick Hurst, a 24-year-old evangelist from Greenville, South Carolina, to coordinate its virtual presence. Hurst and his wife, Chelsea, have amassed 2 million followers.

But what impressed Ford even more than Hurst’s social media success was that when he came to Ford’s house to talk, Hurst helped clean up mud that Ford’s dog, Buddy, had tracked into the house. This demonstrated humility, Ford said, one of the virtues he tries to pass on to his mentees.

Ford has begun encouraging congregations to become mentoring churches. Informally now but perhaps more formally in the future, he’d like to help churches pair older members with younger ones to talk about how the church can help shape their lives.

Even better, he said, why can’t older members reach out to loved ones, friends, neighbors and co-workers left cold by the mainstream church? Those are the people for whom the church exists, he said, not the members.

The growing mental health crisis also should be part of any mentoring group or one-on-one relationship, Ford said. Perhaps a mentee is struggling with suicide, depression or addiction. Or a loved one. Or someone (likely more than one) in the church he or she leads.

Such personal connection is not necessarily a new focus, Ford said, but one that takes on greater relevance in an age dominated by technology — seizing every opportunity to share God’s love, in a cafe as often as a church, with strangers as much as with Sunday morning regulars.

He tells the story of the time his daughter, Deborah Gourley, was in the hospital dealing with a return of cancer. Among her visitors was Billy Graham, who was also there for treatment. As Gourley made her way to a test, Graham was in a wheelchair at the end of a long hall, waiting for her.

She threw herself into his arms. He prayed for her, comforting her with the promise of God’s love. Weeks later, at his bedside in his home in Montreat, North Carolina, she told him, “Uncle Billy, that was the best sermon you ever preached. Not on a platform but you in a wheelchair and me in need.”

‘The gift that has been given’

When asked what he thinks about reaching his 90th birthday, Ford recites “The Gift,” by the American poet Mary Oliver. Its last stanza reads:

So, be slow if you must, but let

Love still as once you loved, deeply

and without patience. Let God and the world

know you are grateful.

That the gift has been given.

Despite his age, Ford is painting in watercolors and pastels. He’s working on his 14th book — this time, trying his hand at poetry.

Ford admits to some apprehension of what comes after this life, but also to expectation and intrigue.

“Why should I not trust him for a new arriving into what I have not experienced?” he said. “I’ve trusted the Lord in all the changes of the years; I can trust him for what’s ahead.”

Some nights, he lies awake worrying about the world his grandchildren will inherit. He and Jean have five, and two great-grandchildren. But he doesn’t dwell on it, for there are poems to write, people to mentor and hope to share.

“I still want to let people know about the gift that has been given,” he said. “I may have 10 more years. Could be.”