Melissa Earley is the lead pastor of First United Methodist Church of Arlington Heights, IL. She has written for the Christian Century and United Methodist Disciplines. She is also active in the Chicago story-telling community and recently won her first Moth Story Slam. She blogs at www.melissa-earley.com. 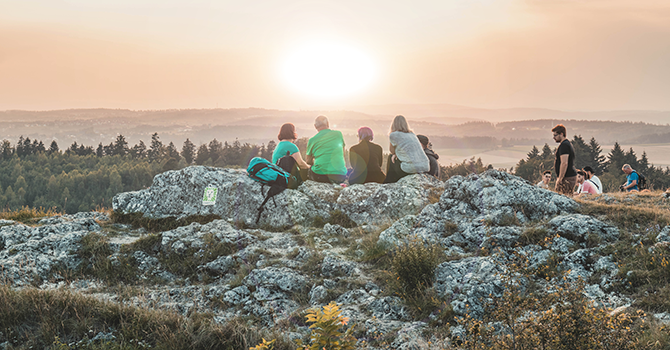 For one pastor, feeding the spiritually hungry means meeting them where they are.

At 8:00 on a Sunday morning, I usually worship in the suburban Chicago church where I am pastor, wearing a stole and sensible flats. But this Sunday, I am leading a group of 10 on a hike in a Chicago forest preserve, wearing a bright blue Osprey daypack and hiking shoes.

We’ve done introductions, named our intentions and are heading off toward the first stop, where I will guide them in a contemplative practice I’ve found in a book. I feel utterly ridiculous and absolutely delighted.

It is an event for my Meetup group, “Re-Creation: Hour-long retreats in the outdoors.” Meetup, a social networking site, gives people the opportunity to connect in real life around activities they enjoy -- like hiking and contemplation. My group invites participants to spend time in nature and connect with other spiritually minded people and practices, and with the Holy.

For Re-Creation, I planned some events on Saturdays and some on Sundays, even though it meant I would miss worship on three Sundays in the summer. As I’m the lead pastor, this felt like a big deal. But it was good for the congregation to know how important I thought it was for us to actively seek out people who would not normally come to church. Just unlocking the doors on Sunday morning wasn’t bringing masses of newcomers.

The group roster swelled to 100. Then 200. We’re now up to more than 400 members. Not nearly that many people sign up for the events themselves. Usually four to six Meetup people come, and three to four people from my church. And there are always those who RSVP and then don’t show, just like church.

My congregation received my announcement about the Meetup roster with an audible gasp. We’d confused shrinking worship attendance with a lack of interest in God. The people who attend the Meetup also meditate, see reiki practitioners and go on silent retreats.

They want to connect with other spiritually minded people. They want community. They want experiences of the holy. These are all things the church should be good at, but we exert a lot of effort not offering them.

We spin our wheels getting people to serve on committees and bring treats to coffee hour. No wonder people trade church for coffee shops and weekends on the lake. People are spiritually hungry, and we ask them to cook for potluck suppers.

After introductions, I lead us just a short way down the trail and then pause at an opening in the trees. I read a Mary Oliver poem and then teach a form of centering prayer. We continue on the hike. The group divides into two clusters. The people who joined via the app get to know each other, while the five people from my church talk like old friends. How do they ever expect us to grow if they don’t talk to strangers? I think.

We continue until about the midway point of the trail, where I introduce them to “lectio divina in nature,” in which the natural surroundings are the text, instead of Scripture. I hand out a description of the steps on a laminated sheet complete with the church logo and website. “They are less likely to toss the laminated paper,” I had explained to my secretary. “The logo reminds them about the cool church that organized the Meetup.”

I had told my church that success was simply meeting people we otherwise would not have met. I lied. Secretly, I thought this Meetup would clear a path from the forest preserve to our sanctuary.

We finish the hike in contemplative silence. At the end, I teach an embodied prayer.

Hands raised. “Christ above me.” (Participants are invited to use whatever word for the Holy fits for them.)

Hands out to the sides. “Christ beside me.”

Hands to the chest. “Christ inside me.”

Hands out in front, to receive and to offer. “Amen.”

We share with each other our worries, so that we won’t have to carry them alone, and those things for which we are thankful, so that we can celebrate with others. As we say goodbye, people hug. Community is formed.

As a college student, I spent time in a conservative evangelical campus community. We wanted people to follow Jesus so that he could save them from hell. Those of us in the mainline church don’t worry so much about the unchurched getting saved. We worry more about saving our churches.

We get anxious about numbers, and we shrink evangelism to church growth, measuring success by butts in pews and dollars in plates. We want people to come to church to replace the ones who have died or moved or left angry or just burned out. We want to reinvigorate the congregation with “new blood,” forgetting that blood transfusions are for the benefit of the recipient, not the donor.

As I drive home, I reflect on the morning. When our walk started, I thought my delight was because I was ditching church for a walk in the woods. But my delight was deeper than a day off. I often feel more like the executive director of a religiously affiliated institution than a pastor of a congregation of disciples. Leading this pack of strangers was the most I’d felt like a real pastor in a long time.

I wasn’t skipping church. I’d been to church. I see the point of the day for the first time: it wasn’t to invite people to church but to participate in church with them.

I remember a holy moment. During the lectio divina, I’d hiked ahead of the group to the gathering point on the trail. Dense fog had hushed the distant sounds of traffic and cloaked the woods and prairie in mystery.

I slowed my pace. Breathing. Noticing. A deer stepped out of the woods onto the trail about 50 feet in front of me. We stood, eyes locked for several seconds. Both of us beholding, and beheld.