The theologian and psychologist investigates the history of the reconciliation movement and offers, in her new book, a womanist view that recognizes the complexity of racism and centers the conversation on its victims.

When Chanequa Walker-Barnes was at Duke Divinity School pursuing her master’s degree, she immersed herself in the conversation on racial reconciliation. But she was left with questions.

Part of her loved the conversation, but part of her had reservations. She sensed that something was missing in the dialogue.

“I eventually realized what was missing were the voices of women, particularly women of color,” she said.

Most of the voices talking about reconciliation were men — white men, and to a lesser degree black men — and the emphases of the conversation showed that. While reconciliation emphasized relationship across racial divisions, black women had always been in close contact with white women and children in slavery. Emphasizing proximity made little sense for the black women Walker-Barnes knew. 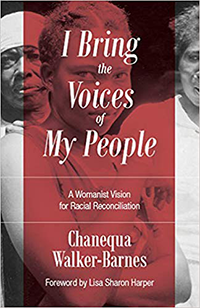 In her book, “I Bring the Voices of My People,” Walker-Barnes aims to bring the voices of black women forward.

Without black women in the conversation, racial reconciliation will never “reach for the type of racial justice that women of color really need to see,” she said.

Walker-Barnes earned her M.S. and Ph.D. in clinical psychology from the University of Miami and her M.Div. from Duke Divinity School. She is currently an associate professor of pastoral care and counseling in the McAfee School of Theology at Mercer University.

She spoke with Faith & Leadership’s Chris Karnadi about the book, and why a womanist view of reconciliation matters for all Christians. The following is an edited transcript.

Faith & Leadership: You connect the evangelical church and the rise of the reconciliation movement. Can you talk about that connection?

Chanequa Walker-Barnes: Right. There is a 20-year history of the racial reconciliation movement in the evangelical church. It extended beyond that, but 20 years of really pumping money into this, to the point where many seminaries now have courses on reconciliation. There are conferences all over the place, publishing series devoted to reconciliation.

In terms of its history, a key moment was when the Promise Keepers movement started in the early ’90s. Promise Keepers had racial reconciliation as one of the promises. It was the sixth promise, on unity.

What Promise Keepers was doing was huge in terms of naming racism and racial division as a problem, and saying that it was the church’s role to address racism, and to an overwhelmingly white audience. So for Bill McCartney to name racism and reconciliation as one of Promise Keepers’ core principles was really a watershed moment — and not just because of the talk around it, but the money.

Promise Keepers were serious in putting money and resources and programming behind that emphasis, so that many of the people who are leaders in the reconciliation movement today, who are recognized as leaders, got their start in those Promise Keepers rallies.

What we see is that the model of reconciliation that Promise Keepers built — white men and black men getting together on the National Mall and hugging it out and saying, “I’m my brother’s keeper” — became the model for racial reconciliation within the evangelical movement. Then, because the evangelical church kind of leads the reconciliation movement in the U.S., that becomes the model nationally for what people are trying to do. It’s about getting people of color and white people together in the same space and getting them to confess their racial sins and pledge friendship together.

CWB: I think the womanist view of racial reconciliation is to first recognize the full complexity of racism. It does not see racism primarily as an interpersonal issue about a lack of friendships between white people and people of color.

It doesn’t say that the problem of racism is too much separation between whites and people of color. Rather, a womanist view really sees racism as a systemic issue that is woven throughout our society, and it’s also linked with other forms of oppression such that it impacts different people differently.

The other difference, I think, is that womanism centers the framework for reconciliation on the victims of racism.

Womanism is a school of thought that centers the perspective of black women in particular. So in racism, womanism says that the primary issue in racism is not white people feeling like they don’t have black friends, but it’s really about the harm that’s been done to people of color, both external and internal.

One of the things that I also felt was missing from the reconciliation movement has been any discussion of how racism impacts my image of God, especially as an African American woman. And how does this image of God impact my image of myself?

F&L: Can you say more about how the conversation of reconciliation has been male-centric?

CWB: One way is the focus on distance. Most of the reconciliation movement presumes that racism is evident in the distance and lack of relationship between white people and people of color. So it says that what we need is more proximity between — to reduce it to black and white — black and white people.

How that is misguided is pretty obvious, especially to women of color in the South.

When I talk to my family members, many of whom have never read anything on racial reconciliation, they chuckle at that automatically and say that’s ridiculous, because as black women, we have always been in proximity to white women.

Throughout slavery and beyond, black women have been the caretakers. Women in my family are home health workers for elderly white people. They work in nursing homes for white people. They have been domestic workers in white homes, caring for white children and families. So the history of black women — who often in slavery had to sleep literally at the foot of the white mistress’s bed so that if she woke up in the middle of the night and wanted something, they would be there — the issue is not proximity.

We understand that proximity alone isn’t a solution, because proximity itself and relationship are still structured by power. You can be so close to someone that you can literally raise a child and nurse a child, and have that child grow up and continue to keep you in slavery.

That’s one thing that’s real obvious. The other is what problems of racism that we focus on. We have talked, and rightly so, about mass incarceration or substance abuse, both issues that affect more men, but we don’t talk as much about the issues that hit women predominantly. Health disparities. Mental health. The gap between education and wages, how black women are highly educated compared with other segments of the U.S. population but still make less money. The extremely high rate of infant mortality among African American women, another one of those reminders that even as the educational levels and access to health care have risen for African American women, there is something else happening, and that something else probably has to do with racism.

CWB: I have lots of friends in the movement who’ve talked about breaking away from that reconciliation language because of the way that it has been co-opted. I know many people who are more black liberation theologians, womanist theologians who also critique the evangelical use of the term and for that reason have not been invested in it.

But I also see reconciliation as — for me, it really is the central theme undergirding all of Scripture. I mean, from the garden on. It’s this idea that what God is calling us to do is not just reconcile us to each other, but it’s to reconcile us to God and to reconcile us to the creation, to the earth, which is even more important than ever.

We’re talking about God’s shalom. That’s a bigger issue than relationships. That’s a bigger issue even than just racial justice. So for me, “reconciliation” is the word that when understood holistically, when understood as part of this way that we strive for beloved community, that’s the word that still captures me. I can’t find a bigger or better word for it than “reconciliation.”