Kaitlin Curtice is an enrolled citizen of the Potawatomi Citizen Band Nation. She is a nationally known speaker and the author of “Glory Happening: Finding the Divine in Everyday Places” and the forthcoming “Native: Identity, Belonging, and Rediscovering God.”

Stories are sacred — especially the stories that are undertold and suppressed, says the author in an excerpt from a new book that tells her own story of rediscovering God as a Potawatomi woman.

Languages carry stories. Oral Indigenous societies pass family and cultural stories down generation to generation to preserve culture. To be able to hear one of our Potawatomi stories in Potawatomi is an absolute honor, because it connects me back to who we once were and who we still are today. Even though colonization has taken so much from us, telling our creation narrative or our winter stories, even in English, still means something. Telling our experiences, like I’m expressing my experiences to you in this book, is a sacred kind of work, and as we pass our stories and experiences down to our children, we are changing our children, changing ourselves, and changing the world. 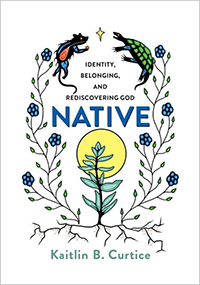 In 2017 I hosted an event in our city focused on the conversation surrounding Indigenous people and the events that unfolded in Standing Rock, North Dakota. The Dakota Access Pipeline was originally set to go through Bismarck, North Dakota, a predominantly white city, but it was rerouted to go through an area near the Standing Rock Sioux reservation, so that it impacted Indigenous peoples and their water supply. In response, Indigenous peoples and their allies gathered from all over the world to fight against a pipeline that would poison the water in Lake Oahe and the Missouri River. The event was created to give voice to Indigenous peoples and allies who went to Standing Rock to show support to water protectors, and as someone who did not go to Standing Rock, I wanted to listen, engage, and learn for myself. As the event drew closer, many of the people who were going to share were unable to come, so there were only a few of us left. I decided to open up the microphone to anyone attending and make it a public storytelling event. My friend Jonathan from the Navajo Nation stepped up to the microphone. He reminded us that we belong to each other, that we must stick together and have honest conversations for the sake of a better future. I deeply felt every word, remembering how much language and expression matter, how important it is that we speak to each other in peace and with honesty, especially when we are so divided around so many things. Can you imagine if all over the country we hosted storytelling events, inviting people to step up to a microphone? Yes, it could go wrong, but it could also go so right when people are given space to lead with vulnerability and humility. People could tell their stories of surviving trauma, their stories of beating cancer or still fighting against it. Others might tell about what it’s like to be a queer woman of color in America or a Sikh man in America who battles hate crimes against his community daily. Still others might talk about what it’s like to be lonely or in love or both. You see, our human expressions, no matter how varied, still bring us together in ways that we cannot always understand, and language is the force that guides us.

One of the church’s biggest blind spots is ignoring the stories of those on the outside. We hide behind dogma and theology instead of leaning into our humanity to connect with one another or to the land. But when we stop to look out a window and see what is happening outside, or when we step outside the door of our home to breathe the fresh, cold air, we are taking in the stories of the earth. As Anishinaabe author Richard Wagamese writes, “When you break the connection that binds you to money, time, obligations, expectations and concerns, the land enters you. It transports you.” And when we step back into those spaces again, those spaces filled with noise, we have stories to tell. I find that when I go outside to listen to the language that only the land speaks, she sends me back with poetry. She sends me back with a connectedness to both her soul and mine that can be expressed only in words that have rhythm and movement and life to them.

When the wind blows, we imagine she is erasing every injustice,

sweeping misdoings from the east to the west,

making room for something new, a more whole world.

Instead, what we don’t realize is that she is rustling the tree branches

to sing us a song.

Instead, she is sowing seeds across the landscapes,

seeds that tomorrow will become the beauty that restores us.

Instead, she is whispering for us to hold on, to keep going,

to water those seeds, because one day, they will show us the way home.

Poetry is life to us and to those around us. Throughout time, our poets are often our prophets, the ones who dance and sing and write, expressing things we did not know were stirring inside us for years. Our poets, our storytellers, are the bridge between the languages of the earth and our spoken languages, between the stories of the earth and our stories. May we all learn what it means to be poets who step outside and back inside, made new, sacred language flowing from our lips to and for one another.

We live in an era in which we are beginning to dig deeper into questions of how we got here. We are asking why there is so much injustice, why so many of our police are corrupt, why Black men can’t kneel during the national anthem, and why a holiday called Columbus Day is offensive. Language creates cultures, cultures create nations, and leaders of nations tend to write history, and we must ask what our language evokes, whether we are using it for good or for evil.

We live in a time when Black people, Indigenous people, and other people of color are speaking up, sharing our stories, redefining what it means to be alive in America — but let’s acknowledge that many of these people have been speaking up for a long time and are only now being heard, if heard at all.

Thanksgiving 2018 was a really difficult time for me. Native American Heritage Month happens in November, so while we are celebrating that we are still here, we are bombarded with Thanksgiving myths and people asking us for all the resources they should have been asking about any other month of the year. Kind, well-intentioned parents message me asking for book lists to read to their children, churches email me asking for Thanksgiving reflections that don’t center celebration of Pilgrims or sometimes even inviting me to preach, unpaid, on a topic that is really difficult for me, and I struggle to find the right language to express my exhaustion.

In 2018, when my inboxes were full of these messages, I finally went to my social media accounts and made an announcement asking people to stop messaging me, to do the work themselves, and to stop expecting Indigenous peoples to give more than we already give every day of the year, especially at Thanksgiving. It is a time of confusion and mourning, and I honestly don’t have anything left to give others in that space. Non-Native people responded, held me up, thanked me for speaking, and some of my white friends apologized. One friend sent me a gift a few months later, with a note of both thanks and apology, a bag of coffee mailed with it. I drank that coffee and thought of my friend every day, thought of the kind of ally she wants to become. We all make mistakes in these conversations, and we have to be willing to step beyond our fear of saying the wrong thing to ask hard questions and have honest conversations about where we go from here. My non-Native friends have to understand that the myths told at Thanksgiving only continue the toxic stereotypes and hateful language that has always been spewed at us, and they have to do the work to educate themselves about a better way. Roxanne Dunbar-Ortiz and Dina Gilio-Whitaker wrote a book on this topic called “All the Real Indians Died Off”: And 20 Other Myths about Native Americans. In the introduction, they write, “For five centuries Indians have been disappearing in the collective imagination. They are disappearing in plain sight.”

Indigenous peoples cannot fight against these mistruths alone. Conversations about replacing Columbus Day with Indigenous Peoples Day shouldn’t be happening just once every year or just within circles of Native people. It should be discussed in city planning meetings, and our street signs should be renamed if they carry traumatic names or celebrate the people who committed atrocities throughout history, because language is about the fabric of a place, what we create, how we explain who we are, who God is, and what the responsibility of those in power must be. To be a place of “we the people,” we have to be a place that is truly for all people, and how do we do this if we don’t talk about the stolen land that America rests on? How do we do this if we don’t talk about Confederate monuments and schools named after racists? The answer is with all of us; to tell the truth is to give language to experiences that are often ignored by society.

From the book “Native: Identity, Belonging, and Rediscovering God” (Brazos Press, 2020), by Kaitlin Curtice. Reprinted with permission. All rights reserved.