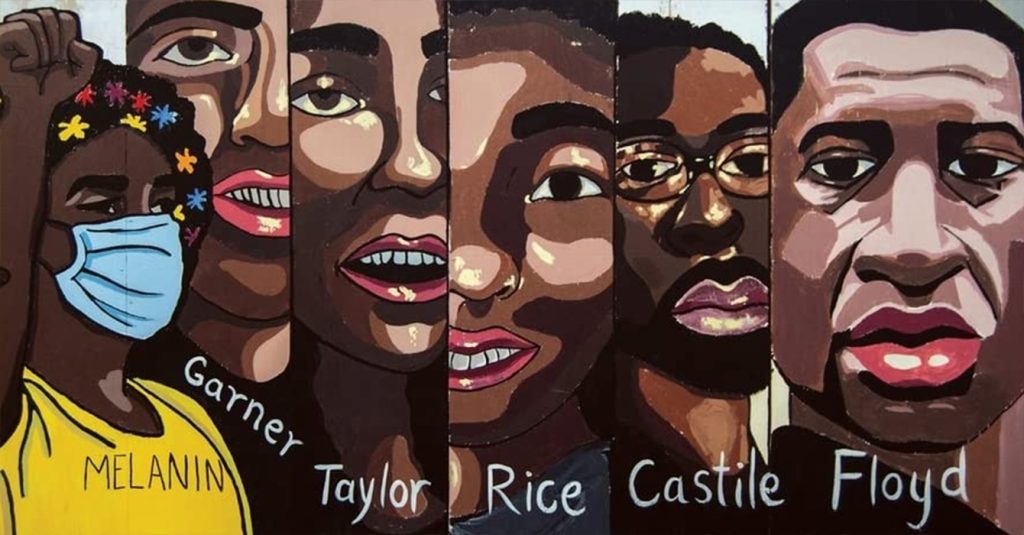 In her recent book, Kelly Brown Douglas speaks about how resurrection hope means working toward a future where Black life can flourish.

Our children can ask tough questions.

One of the tough questions that Kelly Brown Douglas faced from her son, a Black man, was whether Black lives would ever matter.

It was in the summer of 2020, when the pandemic and public killings of Black men were all over the news. The question was crucial, but the answers weren’t so simple and pushed Douglas to examine what she really believed about the crucifixion and resurrection of Jesus Christ.

“I get it that Christ is Black,” he said to Douglas. “But what difference is that making to us right now? Black people are still getting killed.”

It’s answering this question that drives Douglas’ book “Resurrection Hope: A Future Where Black Lives Matter.” In the book, she articulates how she, and this nation, can get stuck on the crucifixion, where death becomes the end of the story. Instead, she argues, Christians should turn to meet Christ in Galilee, finding him and joining him in the work of making a new life.

Douglas spoke with Faith & Leadership’s Chris Karnadi about the book and what we can learn from our children’s questions. The following is an edited transcript.

Faith & Leadership: What led you to write this book?

Kelly Brown Douglas: All of my books begin with a journey of “faith seeking understanding,” to quote Anselm. That’s what I think theology is; that’s what it has been for me.

And so my writings always begin with these issues and questions of faith as I try to understand the justice of God amid the realities of white supremacy, anti-Blackness and ongoing systemic, cultural sin.

In this instance, those questions of my own faith were exacerbated because I was also facing the questions of my son, as a mother. My son and I often find ourselves in various conversations as he navigates what it means to be Black and male in a culture and a society so thoroughly saturated with white supremacist, anti-Black realities.

And my son kept asking me a question in 2020 that I could not turn away from: “Will Black lives ever really matter?”

That question cut to the core for me, what it meant for me to be a mother and my concern for my son and his future and the future of his kids. And it also cut to the core of my faith, because that question — “Will Black lives ever really matter?” — was really the question, “Can we really trust in the promise of God for a more just future?”

If Black lives are never going to matter, then that promise of God is a false promise, so we cannot trust him. And so the many different ways in which he asked that question, and sometimes directly, is what pushed me into this journey through this book.

My son grew up in the church and grew up with the notion of the Black Christ. But he was asking a question of theodicy.

In the midst of the pandemic and the deaths of George Floyd, Breonna Taylor and others, what did it matter that Christ identified with us? And what I realized is that I was stuck on the cross and this Christ that was Black was dying with us. But Black death was being sanctified and became necessary.

His question took me there. What does the Black Christ really mean?

KBD: It took me a while to get there. This book was a journey through despair, to faith, through doubt, back to faith, through crucifixion, to resurrection. It affirmed and made me really believe that faith and doubt go together.

Even though I can come out and say at the end of this book that there’s resurrection hope, that doesn’t mean that it’s a once-and-for-all journey, and that I won’t have to walk through this journey again.

Faith is not a one-time journey. Hope is something that, I think, takes work.

And so what does that look like, on two levels? First, it means understanding what got us to this place and the depth of the reality that we live in, where Black lives have come not to matter.

One of the things that was happening in the nation because of George Floyd’s death, everyone was coming to this sort of new awakening of racial injustice. It required Black death to get us there, but we’d already had a number of crucifixions. We already went through Trayvon Martin, Mike Brown and Philando Castile; Rekia Boyd and Atatiana Jefferson.

How many Black deaths does it require just to get us to recognize that there’s racial injustice, and how many more Black deaths are going to happen before we create a racially just society?

So I said, “Maybe if that’s where we are, then this isn’t the faith for me.” But then I heard the scripture of the resurrected Jesus telling the disciples to meet him at Galilee; I literally remember hearing that in my head. And I went in search of Galilee.

The only Galilee that I could think of at that point was the Black Lives Matter protests down in D.C. And to be in those protests, among those protestors, I knew then that it is in this movement for a more just future that we really see the movement of the resurrected Christ. You really see God, and you feel the presence of God. Because I felt, I felt the presence of God, and my hope was reawakened.

In that protest, these people believed, really believed, that a future where Black lives could matter would indeed become a reality, because if they didn’t believe it, they wouldn’t be down there fighting for it. And that to me is hope, what hope looks like. And that is what resurrection hope looks like, because it calls you to life so that we can partner together in creating new life.

F&L: Looking toward Easter, how do you think our Easter hopes should be influenced by the events of the world?

We have to ask ourselves, “Where would the resurrected Jesus be calling us to?” Where’s Galilee for us, and what does that mean for us in terms of the ways in which we have to partner with God to move toward new life?

When we talk about Easter Sunday, we can’t just talk about it and say, “I believe the Lord is risen.” What does that look like practically, in reality, in history? We only know what that looks like when we have an appreciation for the crucifying reality, from which God has freed us or is trying to free us.

F&L: You talk about the silence of the white church in the book — what should Easter look like for them?

KBD: It should look like the courage to claim their voices and to really claim their faith.

We hear the voices of the white church when it’s George Floyd. We didn’t hear that much around many others who have died. Why don’t we hear those voices when it’s not a big thing on TV? Black people are being killed every day; where are those white clergy voices now?

I think that the white church has to reclaim its faith and what it really means to have faith in a resurrected Jesus.

I think of the white church like the religious leaders and disciples after Jesus’ death cowering behind closed doors in fear.

Who are the enemies that they’re scared of? Are they afraid of losing some kind of privilege? Easter for the white church should mean being called out from behind those closed doors.