The Rev. Arionne Yvette Williams is the associate chaplain at the University of Indianapolis and the author of “The Women of the Bible and You: A Weekly Devotional” and “Love Like I’ve Never Been Hurt: How to Heal From Heartbreak.” At the university, Williams provides leadership in McCleary Chapel developing interfaith programs, overseeing chapel ministries for Christian worship and teaching in the Lantz Center for Christian Vocations and Formation. She is a graduate of Howard University and Garrett-Evangelical Theological Seminary and is an ordained elder in the AME Zion Church. She is also a member of the board of directors for the Center for Interfaith Cooperation in Indianapolis. Connect with her at ArionneYvette.com. 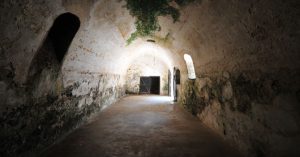 The dungeon at Elmina Castle in Ghana where enslaved men were held during the period of the trans-Atlantic slave trade. iStock / demerzel21

We should partner with others who are committed to anti-racism work and not waste our efforts on convincing those who won’t acknowledge the need, writes a university chaplain.

I will never forget visiting Elmina Castle, a fortress in coastal Ghana that was central to the African slave trade.

Within Elmina’s whitewashed walls were two churches, one Catholic and one Protestant.

You read that right. There were two churches inside the castle where thousands of kidnapped Africans -- -- robbed of their homes, people and culture, never to return -- were held in horrid conditions, waiting to be sold as chattel.

Only steps away from the dungeons that held the enslaved were churches where soldiers who “maintained order” (read: raped, tortured and otherwise brutalized them) apparently worshipped Jesus on Sundays.

This represents the institutional church’s full participation in slavery -- the trans-Atlantic slave trade as well as the ongoing systemic commodification of people. Moreover, it shows the church’s complicity in ensuring slavery’s endurance by providing spiritual leadership and pastoral care to the soldiers who helped secure its success. This is one example. There are more.

As a Black woman, I came to Elmina expecting to leave feeling angry. As a clergyperson, I left feeling ashamed. The institution to which I vowed a lifetime of service was, in part, responsible for supporting the slavery and oppression of Black folks around the world.

Racism is everywhere, including in our so-called holy places. Though it often hides in plain sight, it is not hard to identify. We start by telling the truth about our racist history and then tracing all the ways that history has shaped and continues to shape our society, its institutions, its people.

What if the churches like those that supplied pastoral care to the soldiers of Elmina openly acknowledged the truth of that history and began to look intentionally for the ways racism still shows up in their practices and theology? What if our American institutions did the same?

What if we used our influence to push that agenda forward, as opposed to wasting time, energy and resources arguing about the existence of institutional racism?

People recognize that racism is systemic. In the wake of George Floyd’s murder, protests erupted around the world, and you and I began receiving emails from just about every American company we have ever done business with. Organizations, public and private, and from virtually every industry, began to call out racism, vowing to reshape their policies and practices to be more inclusive, equitable and just.

Entities began to remove Confederate monuments, to highlight Black achievement and culture, to create support resources and to issue statements about their pursuit of anti-racism work. It was astounding. The system itself inched toward honesty about its own racism.

I quickly realized that the time was right to not simply rejoice that some people were finally getting it. Their reactions showed that some of them had already understood and were now desperate to prove where they stood. So why not hold them accountable to their own words?

It is time to pivot. We need to quit having arguments with the All Lives Matter crowd. They will begin to do the work of becoming truly anti-racist only when they want to, not before.

We should stop debating on social media with those who refuse to admit the truth of the oppression all around them. Instead, while we have the attention and the commitment from so many entities who claim they want to fix this problem, let’s engage them, their energy and resources in the work of doing just that.

More plainly, for the justice seekers, our energies are best spent doing the work of identifying how systemic racism is functioning in the spaces where we have influence. Look for it. It is there.

We do ourselves no favors by pretending that our own organizations are doing all things well just because they have yet to be embarrassed by some racist event going viral online. The best approach is to regard oppression as embedded. Find it and address it head-on. This includes the church, which is not innocent!

I am convinced that we lose hard-won ground when we waste time arguing with people who have no desire to go with us. Abandon the myth that your debating will convince people who are committed to misunderstanding. Such activity is a drain; it robs us of what we need to do the real work.

Free yourself to be aligned with those who want to see change and are determined to accomplish it.

We don’t need everybody in order to secure wins. All we need is a focused few to combine our talents, strategic brilliance, privilege and power to begin uprooting racist practices, policies and people in the places where we have a voice, a vote, influence or authority.

Our children and grandchildren are depending on us to deliver them a better world. Moreover, God has called us to this work. The time is now; the world is ripe for change.

We already have everything we need to be successful: faith, willing workers, and God’s power and blessing. As a preacher of the gospel, I am mindful that through Christ we already have the victory.

“Then he said to his disciples, ‘The harvest is plentiful, but the laborers are few; therefore ask the Lord of the harvest to send out laborers into his harvest’” (Matthew 9:37-38 NRSV).

May we be those laborers, the answer to Jesus’ prayer, and start bringing in a harvest that overflows with the fruit of justice, freedom and true devotion to God and community.