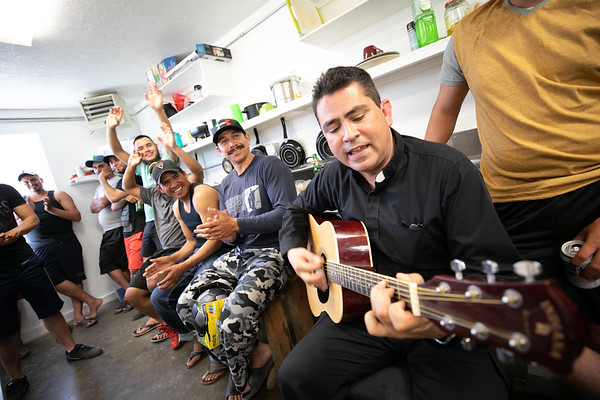 When the Rev. Joe Tito crisscrossed the border between McAllen, Texas, and Reynosa, Mexico, he saw firsthand the drama that his immigrant parishioners had so often described to him.

When the Rev. Joe Tito crisscrossed the border between McAllen, Texas, and Reynosa, Mexico, he saw firsthand the drama that his immigrant parishioners had so often described to him. “I’d heard their stories and knew the dangers,” says Tito, pastor of the bilingual St. Nicholas Catholic Church in Evanston, Ill. “But in my 23 years of Hispanic ministry, I had never been to the border. I wanted to see it for myself.”

What he witnessed was both sobering and inspiring. As part of a small delegation of Chicago-based priests, Tito traveled south to spend three days touring shelters managed by nuns, talking with families awaiting asylum, and interacting with parish volunteers who provided migrants with everything from haircuts to food to medical care.

An added benefit of the trip was the camaraderie that developed among the priests from a variety of parishes not currently in ministry together. Each morning they piled into a small van to visit outposts on both sides of the border. Each evening they gathered for dinner to reflect on all they had seen. “One of the great blessings of this program is that the priests experience something formative, and they do it together,” says Joe Boland, vice president of mission for the Catholic Extension, the trip’s sponsoring organization.

Catholic Extension is one of 78 faith-based organizations participating in Lilly Endowment’s national Thriving in Ministry initiative launched in 2018. Its purpose is to support new and existing projects that enable pastors to step away from daily ministry and form small peer communities whose members kick back, learn, worship and grow together. Each program is unique. Click here to read more.