Chloe Sun is professor of Old Testament and academic dean at Logos Evangelical Seminary in El Monte, California. She earned her Ph.D. from Fuller Theological Seminary. Her most recent publication is “Attempt Great Things for God: Theological Education in Diaspora.” 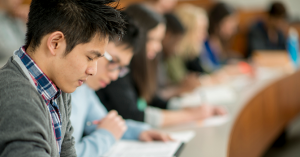 As part of the Theological Education Between the Times series, a seminary professor writes about the effects of endemic power structures on students who come from abroad to study in the West.

Too often, we frame differences in a no-fault way that attributes a kind of primal diversity to every culture but neglects power relations within and between cultures. For instance, North American theological educators often observe that students with roots in Asia are quieter in class. This is commonly attributed to cultural factors.

In the Western cultural context, effective verbal communication is often considered one of the most significant factors in assessing one’s intellectual competence. However, this is not so in the Asian cultural context, where effective listening rather than speaking defines one’s character and virtue.

The Western educational context crowns self-assertion (which translates as individuality and confidence), while the traditional Asian context prizes self-effacement (which is perceived as spiritual maturity and humility).

I would emphasize that differences in patterns of participation arise not just because of ancient cultural traditions but also because of contemporary political conditions. In June 2019, protests in an unprecedented proportion and unthinkable fashion erupted throughout Hong Kong. For more than six months, seas of people gathered around major streets, government headquarters and city centers to voice their need for democracy.

Gradually, what had started as peaceful demonstrations escalated to violence and unprovoked confrontations between the police and the protestors. By November of that year, the protests had intensified, leading to the siege of multiple universities by the police. The police fired tear gas, sponge grenades and rubber bullets into campuses as the students desperately fought back with bricks and gasoline bombs.

This historic upheaval originated from a newly proposed extradition bill, allowing China to have jurisdiction over Hong Kong’s citizens. Eventually, on June 30, 2020, China passed a national security law granting itself the power to subdue protests in the city and to punish anyone undermining the authority of the Chinese government.

Imagine someone from a place like Hong Kong -- or from a country where there is no religious freedom or freedom of expression -- arriving in the United States for theological education.

How would learning take place? How would the formation of one’s intellect and practice work? How would faith and freedom of speech collide? 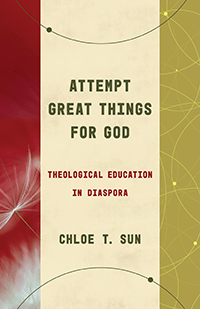 In “Attempt Great Things for God: Theological Education in Diaspora,” I endeavor to make a case for the value of diasporic schools where students can use their native language in learning and in speaking freely about their faith.

In the book, written as part of the Theological Education Between the Times series, I use Logos Evangelical Seminary as a case study in exploring the interconnectedness between the local and the global, between the educational models of the East and the West, and between uniformity and diversity in culture. Logos is the first seminary accredited by the Association of Theological Schools to use Mandarin as its primary instructional language.

Coming to the United States from places like Hong Kong, China, North Korea or Islamic countries, students may encounter an entirely different perspective on life and learning. In my book, I cite examples of the struggles they may face.

Constantly, they wrestle with politically laden questions: Should I use my real name? How much information should I reveal about myself? Is it safe to reveal it? Who may be watching me? What will happen to me or to my family back home if I respond to the instructor’s question honestly?

Should I return to my own country upon graduation or try to stay here? If I return, how will I participate in ministry, knowing that I will not have religious freedom to do so? Should I apply for political asylum in order to stay in the United States? If so, who would be willing to provide evidence for my religious involvement back home? Wouldn’t it get them in trouble?

Political realities also manifest within the classroom. The choice of a language for instruction is itself a political act that helps determine the relative power of everyone in the room. Students and instructors also interact in a matrix that allocates power on the basis of race and ethnicity.

Students new to the United States must overcome the additional hurdles of discerning these structures. And students of Asian descent -- like students of other minoritized groups -- may not have the informal social power that authorizes them to speak up in the ways their classmates do.

Seeing these realities makes clear that theological educators need to consider the dynamics of power and politics in and beyond the classroom. Attending to these dynamics, they may not only optimize what diaspora or minoritized students gain from the class but also appreciate more of what those students bring tothe class: cultural differences, yes, but also deep experiences -- which resonate with the Bible and with the history of the church across continents and millennia -- of living in diaspora and of finding ways to remain faithful under persecution.

Like Hagar, Ruth, Jeremiah, Lydia and Paul, these students understand what it means to be a pilgrim, a minority, one who is powerless and has to juggle two or more worlds at the same time.

This diasporic and pluralistic identity needs to be affirmed, both as a factor in how students learn and as a part of what they have to teach. In the eschatological throne room of God, there is not just one race or one language but a multiplicity of races, ethnicities and languages (Revelation 7:9-17). And those who gather around the throne are marked not just by cultural difference but by their faithful witness even through great tribulation.

The throne room is full of their songs. Theological education in North America would do well to listen.