Susan DeSelms has served as minister of music and organist at the United Parish in Brookline since 2001. She began laying the groundwork for the Negro Spiritual Royalties Project in 2020 and facilitated its launch in October 2021. She is also the choir director and Shabbat pianist at Temple Shir Tikva in Wayland, Massachusetts, and annually brings the church and temple choirs together to lead joint worship services. She was the chair of the 2017 UCC Musicians Association National Conference in Boston: “Empowering Musicians, Transforming Communities.” In 2016, she helped launch and facilitate the End Mass Incarceration initiative at the United Parish with a churchwide reading and discussion of Michelle Alexander’s “The New Jim Crow.” 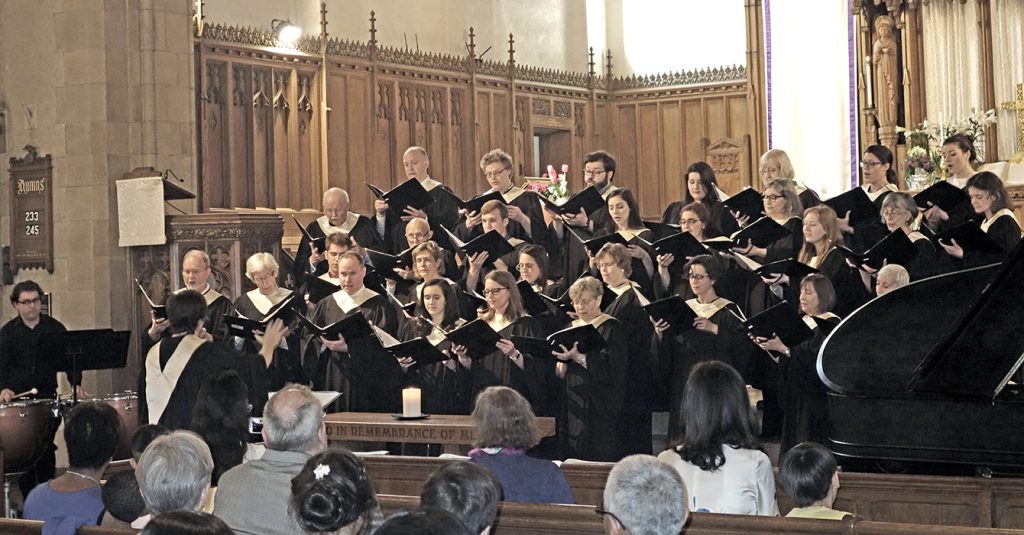 A Massachusetts congregation will be paying “royalties” to local arts nonprofits to acknowledge the musicians who were never compensated.

Negro spirituals are an intrinsic part of American music. We sing them and hear them sung or performed in churches, temples, schools, concert halls and many other settings.

While we are moved by their beauty and the raw emotion they convey, we also must consider that the artists who created them were never compensated in any way for their work. Our Negro Spiritual Royalties Project at the United Parish in Brookline, Massachusetts, is an attempt to recognize that reality and pay forward what can’t be paid directly to those artists.

First, a note about the term: “Negro spirituals” refers to the enormous body of folk songs created collectively by enslaved African Americans. These songs serve as living witnesses to the unique horrors of American slavery, as well as to the merciful and just religion created by enslaved Black people that combines Christianity with African spiritual traditions. I respectfully use the term “Negro spiritual” or “African American spiritual” to give credit where credit is due — and let the discomfort of the term “Negro” serve as a reminder of the work still to be done.

The names of those who created Negro spirituals were not published, if they were ever even generally known. There has been no credit given, either artistic or financial, unlike for other hymns and worship music.

Even before the abolition of slavery, these songs started to make their way into the collective memory of white Americans and into their hymn books. They have also become the source of an untold number of musical arrangements and compositions published and sold to churches, schools, community choruses, orchestras, bands and all manner of musical organizations. The Negro spiritual should be considered the intellectual property of enslaved Africans in America.

Negro spirituals are undeniably brilliant, balancing true artistry with depth of feeling — grief, rage, love, gratitude, joy, bitterness and compassion. The result is that these songs speak to the human spirit. Frederick Douglass, who escaped enslavement, described it like this:

“While on their way, [the enslaved] would make the dense old woods, for miles around, reverberate with their wild songs, revealing at once the highest joy and the deepest sadness. They would compose and sing as they went along, consulting neither time nor tune. …

“… I have sometimes thought that the mere hearing of those songs would do more to impress some minds with the horrible character of slavery, than the reading of whole volumes of philosophy on the subject could do.”

For many years, I have struggled with how to appropriately and respectfully use Negro spirituals in our worship services at the United Parish. They are some of the most powerful, beautiful and expressive pieces that I know. I grew up regarding spirituals as high art of deep religious value. I never considered the possibility that as a white person, I shouldn’t be singing them.

But, like some other white Americans, as I came to acknowledge the injustices faced by people of color in the U.S., I started to reconsider my position. Our church displays a “Black Lives Matter” sign, but were we living that truth? Could we continue to sing Negro spirituals without recognizing that their composers were never compensated? Did we have any business singing them?

Here is just a short list of some commonly known Negro spirituals:

“This Little Light of Mine”

“Down by the Riverside”

“Standing in the Need of Prayer”

“Nobody Knows the Trouble I’ve Seen”

“He’s Got the Whole World in His Hands”

“Do Lord Remember Me”

Experts estimate that there are at least 1,000, and possibly up to 6,000, Negro spirituals in existence coming exclusively from the period of legalized slavery. By all accounts, they were entirely improvised — “honed and refined” according to the tastes and opinions of the participants. They were passed around from one plantation to another, taking on new forms and variations as they went.

For enslaved people, singing was a way to build community that was otherwise forbidden. Singing was a source of strength, comfort and mental distraction from the cruelties of daily life. As an act of artistic expression, singing reinforced self-worth while expressing grief, joy, exhaustion, courage, frustration and hope. Singing was (and is) a form of prayer, and these spiritual songs reveal an absolute faith in God to make things right someday.

In order to keep singing Negro spirituals, we need to address the debt owed to the enslaved Black people who created them. Black Americans have been last in line to receive recognition and financial compensation for the extraordinary contributions they’ve made to American culture.

You — you alone, of all the long, long line

Have stretched out upward, seeking the divine.

At the United Parish, we have decided that whenever we sing Negro spirituals, we will collect a special offering to support the development of Black musicians, beginning with Hamilton-Garrett Music and Arts. We have adopted a pledge expressing our commitment and have raised about $10,000 since October.

Imagine if churches, temples, schools and music publishing companies, whenever they performed or sold arrangements of spirituals, paid even a small amount to organizations that empower Black artists and musicians. For the individual, the cost of participating in this practice would be minor, but the cumulative outcome could be significant.

Little by little, this practice could become one instrument of restorative justice in which we all participate. With God’s help, may we truly become healers of the breach.

We at the United Parish in Brookline

acknowledge the history and significance of the African American Spirituals,

With great respect and deep gratitude

for the extraordinary musical contributions

made to American music by Black people,

we offer our thanks and praise to God

for the creators of the Negro Spirituals and their descendants.

We pledge that each time we sing the spiritual songs

of enslaved Black people in our worship together:

We will sing and hear them with holy reverence and open hearts;

We will honor the unnamed musicians who created them;

And we will pay royalties to organizations

promoting the advancement of Black artists and musicians in America,

starting with Hamilton-Garrett Center for Music and Arts.

We understand that the debt owed to Black musicians and artists

can never be fully repaid.

Through our prayers, our gifts and our actions,

we will forever strive to do what we can

to end systemic racism in America.