Theology that starts with Black women is better for everyone 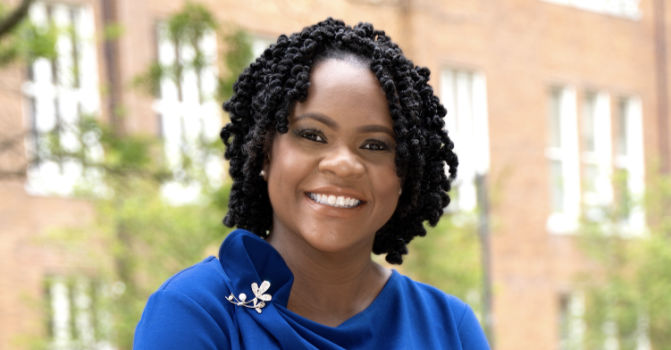 An everyday womanist theology is the focus of Pierce’s most recent book, “In My Grandmother’s House.”

“As a theologian myself that teaches theology at the graduate level, I find that a lot of theology is actually not accessible to the people who care most about it,” she said.

Because much theology is written from the top down, from a scholarly perspective that is foreign to congregations, it can feel disconnected from the church context.

In contrast, Yolanda Pierce’s collection of essays “In My Grandmother’s House” builds theology from the ground up.

Drawing from the wisdom of the Black church mothers, including her own grandmother, Pierce finds a different way of doing theology.

These mothers would not have necessarily identified as preachers or theologians, she said, but they were “the most powerful spiritual model that anyone could have.”

With their perspective in mind, Pierce offers an “everyday” theology that derives its meaning and importance from its interface with regular life, in both its pain and its beauty.

Pierce is the dean of the Howard University School of Divinity and a professor of religion and literature and womanist theology.

She spoke with Faith & Leadership’s Chris Karnadi about the book and how womanist theology is better for all because it starts with the least of these. The following is an edited transcript.

Faith & Leadership: Talk to me about your grandmother. What are some memories or lessons you have from your time with her?

Yolanda Pierce: I was raised by my grandparents, and I talk a great deal in the book about both my grandmother and also the church mothers -- and I want to put them together, because I’m trying to lift up these women of a certain age and generation.

Within my own religious traditions, we have the office of the church mother, which is usually an older African American woman. But even if you don’t have that formally in your tradition, many people within the Black church context have this idea of a church mother.

My grandmother, who was a church mother, and these other church mothers that I was not related to were absolutely amazing teachers and preachers and theologians, even though they would not have understood themselves as such. That’s not language that they would have used to describe themselves.

F&L: What is the importance of “everyday” womanist theology?

YP: When I say “everyday” womanist theology, I’m referring to these tools and skills for survival that Black women adopt.

And I want to be clear when I say “survival” here that I’m talking about more than just existing in the world but about these tools and skills to have a life in a world that is hostile to you by virtue of your race as well as your gender.

This everyday womanist theology is about those survival skills. It’s about the tools.

It’s about how do you navigate a space in a world that often tries to deny your humanity. And so in one of the chapters, I talk about a question of theodicy -- “Does God love Black women?” Or I talk about soteriology, a theology of salvation.

On one hand, I’m using these theological concepts -- theodicy, soteriology -- but the attempt is to do so in a way to say, “What does that look like in the everyday concepts? What does salvation look like in our day-to-day lives?”

The theological concepts are important to me, but the everydayness, the quotidian nature of life is to say that we spend most of our time not thinking profoundly of theological thoughts but just kind of trying to do the things of life -- raise our families and go to work and live in community. And what are the tools we’re bringing to bear on that?

F&L: Does the fact that some of the stories you tell in the book do not have a happy ending figure into the everyday part of this womanist theology?

In one story, there was a warrant for a student of mine to be arrested, and police officers were outside my classroom. My TA notified me and didn’t let them in until after class, and subsequently, we went out into the hallway together, and the student was arrested.

I wish I had a happy ending to that story, about how now the student is doing great and now he’s the president or something, but I don’t.

I don’t have any closure to that particular story except that from time to time, I think about him, and I wonder what has become of his life.

For me, the reason that that is a theological construct is because we are not promised happy endings. There’s no promise of “and everything will be fine, and they’ll all live happily ever after.” Those are actually not God’s promises.

What I’m trying to do is say that even if the happy endings don’t come, and even if the closure to the story is not there, you learn.

F&L: I get the sense that womanist theology is not only better for Black women; it’s better for everyone. Is that true?

It is not my attempt for everyone to say, “Now I must abandon my theological approach.” No, that’s not it at all. But anything that is taking seriously those that are marginalized, the lowest paid, whoever those least are in your community -- what’s good for them is good for everyone.

Instead of a theology that is done from the top down, as so much theology is done, like theology that’s done at the level of ecclesial authority and then is supposed to trickle down to the membership, womanist theology is actually written and done and at its best from the bottom up.

Womanist theology says, “First, start with yourself. First, start with what you observe around you, the people in your community and your neighborhood and your family, because that’s where you see and locate God.”

Yes, I would make the claim that any theology constructed for the least of these is everything that is needed for all of us.

F&L: What do you think people who aren’t Black women should be learning from this book?

YP: Well, I hope they learn some history about Black women’s theological stories, but I also hope that they see within it the need to tell their own stories.

One thing that’s been most wonderful about the dream of publishing this book has been having conversations with churches and schools around this, because people share their own stories.

They talk about their own grandmothers or other mothers or aunties. For me, that is the most powerful piece -- that people say, “Oh, I have a story like yours.” Because we share the same stories in so many ways.

There are many, many differences, and then there are so many similarities, but yes, I hope anyone reading can see some form of his or her own story and would want to share it.

F&L: Is there a generational impact of white theology?

YP: I was trying to get a little bit of that in the book when I was talking about how so many of our images of Jesus are white, that the iconography of Jesus even within the Black spaces is often white -- the representations of Jesus as having blond hair and blue eyes.

Where did this come from? For me, that is very much the influence of the white Christianity, in terms of shaping the iconography of Jesus, and that’s detrimental.

It’s detrimental because it doesn’t take into consideration the actual historical Jesus, a Jewish man. But also, what does it do in terms of hundreds of years of Christian history for African Americans to have an image of God that does not look like them? That is something that I sit with.

What does it mean when in fact people are visualizing Jesus but they are visualizing someone who does not look like them? I’m very, very grateful to have grown up with a very different construct of what Jesus would look like.

Of course, we cannot know. We can’t go back 2,000 years. But it was important to me, because then I always knew I was made in the image and likeness of God. That wasn’t something I had to learn.

It was something that had always been imbedded in me: “You, with your Blackness, are made in the image and likeness of God.” But that is a very, very difficult thing to get hold of and celebrate in a world in which whiteness is so valued.

F&L: Are there some aspects of tradition that can be harmful to inherit?

YP: I would say to anyone that there are some beautiful things about traditions that you inherit and then there are some things that you have to leave behind so that you can be the person that God has called you to be. And so my story is similar to other people’s stories.

There are some wonderful aspects of our traditions -- there’s the music or the worship practices that we have inherited -- and I would love to see some of them carried on.

But I also know that there are some things that you have to leave behind for your own health.

I think I’ve just essentially wanted to give people permission to do that and to say that that’s OK, that leaving some things behind is actually OK, too.

We get really nervous about that, but it’s OK.