Ukrainians show faith in the face of destruction

Nicholas Sooy is a Ph.D. candidate at Fordham University. Together with his wife, he runs the U.S. branch of the Orthodox Peace Fellowship and edits its journal and website, In Communion. 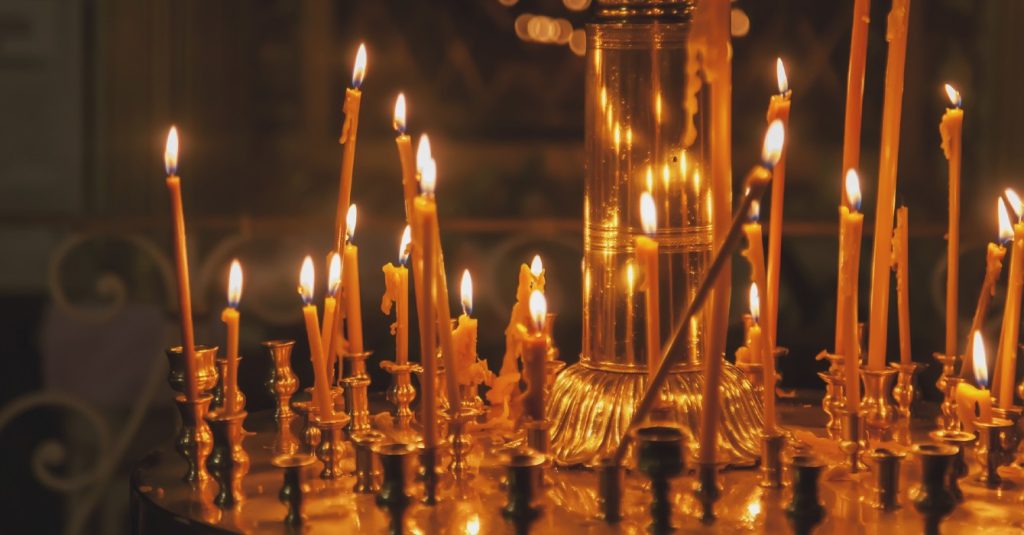 As Orthodox Christians celebrate the most holy season of Pascha, they mark belief in a life free from the reign of death.

Christ is risen from the dead, trampling down death by death, and upon those in the tombs bestowing life! — The Paschal Hymn

Shocking images have emerged from Ukraine in these last several weeks. Civilians lying dead in the road with their hands tied, apparently executed. A family with children burned to death in their car. Two young boys shot dead while trying to flee. Parents writing emergency contact numbers on their children’s backs, in case the children are orphaned. Death appears to reign supreme in Ukraine.

A few years ago, I visited Kyiv as part of a peace delegation with the Orthodox church. Though Ukraine is a religiously diverse nation, approximately 70% of Ukrainians identify as Orthodox Christians. The majesty of the Ukrainian nation and its people astounded me.

I visited Maidan, also known as Independence Square, where the Euromaidan took place, a largely nonviolent, pro-European popular uprising that overthrew the Russian-aligned Viktor Yanukovych. From November 2013 to February 2014, protestors camped in Maidan, marching and demonstrating, until Yanukovych was ousted with the Revolution of Dignity.

The people of Kyiv braved the winter to do this; more than 100 of them were killed by government forces. I was awed visiting the memorials around Maidan. How could people so willingly brave death, in some instances marching directly into police gunfire? The government’s message was clear: we rule by force of death. Yet Ukrainians defied this order of death.

In the weeks leading up to the invasion of Ukraine by Russian forces, I began having nightmares. Kyiv has beautiful, ornate, cavernous subways, and I would dream that the city’s noble people were sheltering from Russian shelling in these tunnels. The nightmares soon came true. Despite the horror, Ukrainians again defied this order of death by gathering and singing songs of hope, of nation and of prayer in those same resonant tunnels.

As news of the Russian invasion spread, what captured the world’s imagination most was the defiance of death by the people of Ukraine. Take a few of the earliest viral moments of the war as examples. Within a day of the invasion, with more than 100 dead already, a woman approached a Russian soldier and offered him a gift of sunflower seeds, telling him that he should keep them in his pocket so that if he were to be killed, flowers would grow.

In another case, a Ukrainian man approached a broken-down Russian tank and joked with the soldiers that he could tow them back to Russia. Not only was the Ukrainian army resisting militarily, but civilians were saying “no” to the Russian reign of death, in small and nonviolent ways.

Where does such courage come from?

One possible answer is faith. Last month, as Russians occupied the Ukrainian town of Slavutych, three civilians were killed as they protested the occupation. Days later, the Rev. Ivan Shepida addressed a gathering of Russian soldiers directly, saying, “You heathens! Take off your crosses, for Christians do not point guns at innocent people.”

Reportedly, when reprimanded by a soldier, he replied that he was not afraid and was already dressed in white vestments so that they would not have to change his robes to perform his funeral.

This religious attitude toward death is essential to Orthodox Christianity. The highest feast of the liturgical year for Orthodox Christians is Pascha (celebrated this year on April 24) — or Easter, as it is known in the West. Consider these excerpts from the paschal hymns.

"The dominion of death can no longer hold men captive, for Christ descended, shattering and destroying its powers! Hell is bound, while the prophets rejoice and cry: The Savior has come to those in faith! Enter, you faithful, into the Resurrection!"

"By Thy Cross, Thou didst destroy death!"

"As God, Thou didst rise from the tomb in glory, raising the world with Thyself, Human nature praises Thee as God, for death has vanished!"

In hymn after hymn, the Orthodox church celebrates the resurrection of Christ as the death of death, the destruction of destruction. The Greek Catholic Church, the second-most populous church in Ukraine, also sings these same hymns at Easter. For these Orthodox and Greek Catholic Christians, this means that Easter is not just about the salvation of our souls but about an entirely new way of living in the world, a life free from the reign of death.

What would it mean to celebrate such freedom? For one, it would mean celebrating the end of war. The Rev. John Meyendorff, one of the most prominent Orthodox theologians of the 20th century, once wrote about this dimension of Pascha:

[T]he laws of this mortal world of ours are made in such a way that their main purpose is to preserve my rights and my property. They justify violence as a form of self-defense. And the history of human society is one of conflicts and wars in which individuals and nations struggle and kill others in the name of temporal benefits which will be destroyed by death anyway. …

On Easter Day (Pascha) however, we celebrate the end of this reign. Christ came to destroy it. “Death is swallowed up in victory, O death, where is your sting?” (1 Corinthians 15:54-55). “Christ is Risen, and no one remains in a tomb” (St. John Chrysostom).

How can Ukrainian Orthodox and Catholic Christians celebrate the end of war and the death of death when death is so ubiquitous? This is a deep mystery of the church, but it is nothing new to Ukrainians of faith.

In 1930, something remarkable reportedly occurred in Kyiv. Soviet leader Nikolai Bukharin gave a speech on atheism at a time when thousands of Christians were being imprisoned and killed. The horrors of the Soviet period mirror those of today. At the end of his speech, he asked whether there were any questions.

One man stood up and said, “Christ is risen!”

The crowd responded, “He is risen indeed!”