What Paul teaches us about coping with trauma

Luis Cruz-Villalobos is a Chilean poet, writer and clinical psychologist. He has devoted himself to the study of resilience and post-traumatic growth, as well as applied hermeneutics, topics on which he based his doctoral research at the Vrije Universiteit Amsterdam. For 15 years, he was a Presbyterian minister (now retired), and he also served as regional secretary for the Southern Cone of the Latin American Theological Fellowship. He is a professor in the faculty of psychology at University of Talca in Chile and conducts psychotherapy for youths, adults and couples. He has written several books, including “Theological Poetry” (with a foreword by the philosopher John D. Caputo), “Keys of Posttraumatic Coping,” “Theory of Unhappiness” and “Positive Coping With Trauma.” 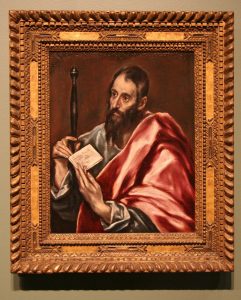 A clinical psychologist, poet and professor reads the letters of Paul through a psychological lens and identifies keys to his resilience and positive religious coping — and how those strategies might help Christians today.

Years ago, in an informal conversation over coffee during a break in a lecture I was giving on resilience and spirituality, one of the participants asked me why I had dedicated myself to the study of post-traumatic coping.

I was silent for a moment. I think the death of my youngest son crossed my mind, but I answered without thinking, as if I were revealing a secret even to myself: “Because I don’t like to suffer.” He looked at me in a strange and somewhat uncomfortable way, apparently not expecting that answer.

Suffering has been defined as “the interpretation of pain.” It is not the same as pain; it is pain that is incorporated into our emotional and historical matrix and enters our narrative, both personal and social, taking on a meaning of its own, for better or worse. How we write, read, reread, edit and reedit our own history of adversity or trauma greatly affects how we suffer from it.

In 1995, as a psychology student, I was introduced to the beautiful concept of resilience, and a great field of interest opened up for me, both personally and academically. While researching positive coping with traumatic events, I came across complementary concepts such as hardiness, religious coping and post-traumatic growth.

Faith experience, religion and spirituality also were commonly presented as important resources for managing suffering in times of high stress.

This was true in my own case, as I expressed in theological poetry the experience of the prolonged illness and death of my 9-month-old son, Maximiliano. My book “Tormenta Crisol: Salmos Desde el Dolor” (“Crucible Storm: Psalms From the Pain”) was written during his illness in 2003.

The apostle Paul was no stranger to suffering, and from my adolescence, I have been a fervent reader of his letters. As a clinical psychologist, I began to wonder how this man, who had gone through such extreme adversity, managed to remain steadfast and be a witness to so many generations of Christians.

Years later, these concerns were transformed into a doctoral research project for which I studied selected texts in Paul’s Second Letter to the Corinthians. In his letters, Paul names his severe difficulties — beatings, stoning, shipwreck, sleeplessness and thirst, among others — and the way he understood and coped with them.

What does Paul teach us about coping with trauma? And what interpretative clues does he offer to help us cope with adversity?

Through my research, I identified 11 “coping keys” in the texts of 2 Corinthians. I list them below and will expand on three of them.

1. Paradoxical identity: understanding oneself as fragile and vulnerable yet also invincible through Christ.

2. The experience of faith as fidelity and perseverance: living faith as a fundamentally practical — rather than theoretical — reality.

3. Resignification of death and traumatic events: interpreting the adverse as something that can be positive.

4. Altruistic coping: focusing on the well-being of others in the midst of adversity.

5. Eschatological coping: focusing on the reality of future glory in times of suffering.

6. Expression of adverse events: making a habit of testimony about overcoming suffering.

7. Detachment from material or visible things: relativizing everything that is not permanent, considering it only preliminary.

8. Identification with Jesus as a model of coping: following Jesus as an example of overcoming adversity.

9. Thanksgiving: practicing gratitude in all circumstances.

10. Perception of the comforting presence of God: having constant awareness of God’s loving presence in the midst of suffering.

11. Prayer: practicing prayer as an effective personal and communal action.

Paradoxical identity (I am frail and weak but invincible): This is the most frequent key to coping in the selected Pauline texts. Paul presents a very particular way of perceiving himself when writing about serious difficulties.

He describes himself as someone who, in himself, is weak and vulnerable but who, through God, has the capacity to contribute in a meaningful and transcendental way to others, enabled to overcome even extreme afflictions.

This perspective allows him to see himself, not as a passive victim, but as someone who can overcome adversity. He views these afflictions as an expected consequence of the mission entrusted to him, but he trusts that they will be overcome in a future filled with an immense and eternal goodness — a goodness that he is called to share with others.

I often tell my patients that self-esteem does not matter; what matters is what it is built on. Having an identity based on our relationship with God, rather than on changeable circumstances or relationships, makes a fundamental difference.

By having a deep love relationship with God, we can take charge of our fragility but also look to the future with hope, as we are inhabited and empowered by the one who is the owner, director and general manager of the universe and its surroundings.

Faithfulness to God in the fulfillment of the mission assigned by him, with total honesty and a clear conscience, is manifested especially in the midst of suffering and opposition.

Perseverance (in Greek, hupomoné — tenacity, resilience) is considered a constitutive and fundamental part of the life of a follower of Jesus Christ, so that positive coping with tribulations is understood as one of the virtues proper to a mature Christian character.

As such, it is not based on practice, personal effort or self-discipline but on the power given by God himself, manifested in the resurrection of Jesus Christ. This power is also experienced by the disciple, in a special way, in overcoming afflictions.

Today, in a Christianity so marked by theological disputes, it is significant to understand that faith is a particular way of living, of facing life, and especially of overcoming adversity.

Altruistic coping (Love endures all things): The apostle describes himself and his co-workers as people who remain focused on the welfare of others, especially in the midst of suffering.

Paul faces adversity believing that his own suffering may end up being a contribution to the well-being of the Christian communities he serves. In other words, he responds to adverse situations altruistically, with his focus on communion and solidarity with the suffering and welfare of others.

Today, in a world marked by individualism, it is essential for us to return to the basic principle of Jesus, for love is important in all areas of life, even in dealing with suffering.

Paul is an outstanding example of a person who manages to turn his adversities into something positive. In today’s language, Paul’s way of coping corresponds to resilience and positive religious coping.

It also seems to have been the way in which many followers of Jesus faced persecution, torture and adversity in general, which is why Paul usually wrote his testimonies in the first person plural. Paul’s experience, then, is not an exceptional case, as my “psalms from the pain” illustrate.

Today, any of us who declare ourselves followers of Jesus can, as Paul did — thanks to God’s presence in us — live lives that, although fragile and vulnerable, are sustained by the loving power of God.